Show Me What You've Got

Behind the Mask of Masquerade

You Say You Want An Evolution is the 37th episode of Bakugan Battle Brawlers. It aired on July 22, 2008, in English.

It's the battle that everyone is looking forward to (except for Masquerade). The showdown between Dan and Delta Dragonoid vs Shun and Storm Skyress. As everyone gears up for the battle, they wonder if Dan will really be able to beat Shun, and what will happen if they can't. As Dan and Shun's battle is about to begin Joe and Wavern both join in to watch the battle and with everyone assembled the battle begins. Meanwhile, Christopher wonders where Alice disappeared to as her alter-ego, Masquerade, continues his battle against Exedra with things going well. Dan and Shun's battle rages on and things look bad when Drago goes down and doesn't get back up, but with encouragement from everyone including Shun and Skyress, Drago gets back up to finish the battle. Meanwhile, Masquerade pulls out a complete turn around against Exedra. The battle between Dan and Shun finally ends and the winner is Drago. Drago begins to evolve, changing from Delta Dragonoid to Ultimate Dragonoid while increasing his power level. Meanwhile, as the Brawlers celebrate, deep within the Doom Dimension, Masquerade watches as his Dual Hydranoid evolves into Alpha Hydranoid from his battle against Exedra. Will Ultimate Drago be able to defeat the deadly Alpha Hydranoid...?

Battle at the Park

Dan and Runo both activate the Bakugan field as reality slows to a halt.

Bakugan remaining on the field: None

Dan and Shun both throw out their Gate Cards against each other.

The winner is Dan Kuso.

Battle in the Doom Dimension - Continues

Masquerade wins this round.

More view of the park.

Dual Hydranoid's close up before attack 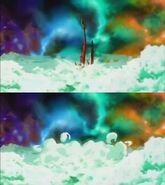 Drago falls into the clouds 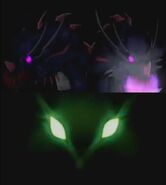 Dual Hydranoid and Storm Skyress' glowing eyes before they attack

Some scenes were redrawn between the Japanese and overseas versions. 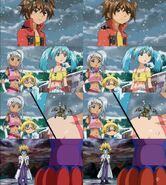 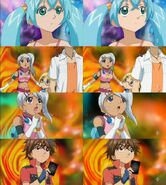 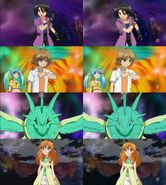 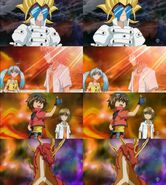 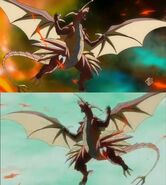 The background has changed and it got mirror effect.(Up:Overseas-Down:Japanese) 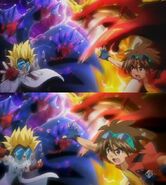 (Up:Japanese-Down:Overseas)
Add a photo to this gallery 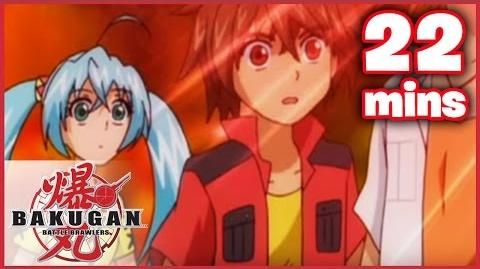 Retrieved from "https://bakugan.fandom.com/wiki/You_Say_You_Want_An_Evolution?oldid=762187"
Community content is available under CC-BY-SA unless otherwise noted.