After Harubaru's brawl against the colossal Master Grizz, it's now Raichi's turn to fight the lanky Master Odore. Before the second brawl starts, Master Odore uses his sorcerer powers to change the square battlefield into the shape of an Emerald cut. Master Grizz threatened Raichi not to lose the battle otherwise the "little one" will suffer the consequence. Tatsuma begged to be spared he is thinking that Master Grizz would roast and eat him.

Master Odore takes his turn first and shoots Win Domiru with his special and unique Shooting Technique called "Whirlwind Shoot" (Senpuu Uchi). Instead of landing it on the Gate Card, Domiru went to the opposite side of the Battlefield. Raichi, thinking that Domiru failed to stand, launched and stood Hollow Munikis on the Gate Card using his ordinary Bakugan shooting technique. It was a mistake in Raichi's assumption because Domiru unleashed its Shuriken-like edges to ricochet back to the opposing Bakugan. Master Odore uses his Special Technique "BakuTech Dancing Samba" to knock out Munikis.

While being taunted by the dancing Master Odore, Raichi thought for a moment and noticed the way that Domiru was launched. Raichi realized that the shooting technique and the special technique is in perfect sync with each other. Master Odore takes his turn and this time, he stood Domiru in the Gate Card. Raichi saw this as a chance to knock out the opposing Bakugan so he shot Hollow Munikis forward. This was another mistake as Domiru caught Munikis with its blades and the two opposing Bakugan spun around the Gate Card until Munikis was kicked out. It is eerily similar to what happened back when Raichi fought against Bone Skuls.

In the third turn, Raichi shoots and stands Hollow Munikis in the Gate Card. Win Domiru knocks Munikis out as it descended from the air. With three consecutive rounds going in Master Odore's favor and Raichi having a really hard time; Harubaru wondered if there is a way for them to actually win the brawl as the two Masters taunt the boys to give up.

Raichi analyzed the situation that if he imitate the way Master Odore shoots his Bakugan and use it in sync with his "Last Quarter of the Moon" Special Technique then he might have a chance to win. As a response, Master Odore taunted him to do the same shooting technique. Raichi obliges and uses Odore's "Whirlwind Shoot" to launch Hollow Munikis. Master Odore launches Win Domiru and the two opposing Bakugan spun vibrantly towards the Gate Card. Domiru stood first and Raichi uses the "Last Quarter of the Moon" to create clones of Munikis to attack Domiru in all sides. This conjunctive move was a success as Domiru was not just knocked out but is also thrown violently into the air, causing the destruction of many columns and Master Odore exclaiming "Oh no!!"

With Raichi's victory, Harubaru demanded to the two masters that they give the Sechs Tavanel and Tatsuma back. Master Grizz, however, said that it's not over yet. Master Odore gets back up on his feet and a two-on-two brawl is set to take place in the Emerald-shaped Battlefield.

Raichi attempts to inflict Critical K.O. on Win Domiru but was fended off

Master Odore gives up on purpose. 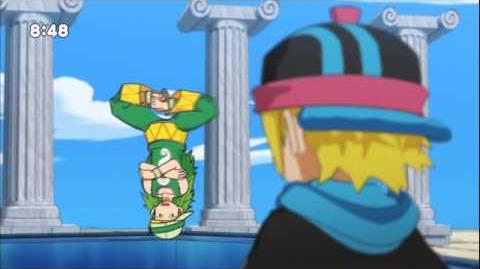 Retrieved from "https://bakugan.fandom.com/wiki/Win_Domiru_(Episode)?oldid=762833"
Community content is available under CC-BY-SA unless otherwise noted.