Ace and Shun team up in a Bakugan Battle Tournament, in order to overload the Alpha Dimension Controller, because it draws power from Bakugan battles. After Marucho purposely disqualifies himself in the singles round, he sneaks the others in. They almost get caught by some guards, until Mira pretends to be a huge Vexos fan-girl and they manage to slip away. As they remain hidden, the Vexos show up, and Mira notices that Spectra tosses his Bakugan the same way as her lost brother Keith. Meanwhile, Ace and Shun are having trouble getting along in the Battle Tournament and are starting to lose against The Dark Angels, who are Vexos wannabes. When their opponents begin taunting them, Shun and Ace put their differences aside and finally come up with a plan. They win with ease and claim their opponent's Bakugan. Afterwards, Shun and Ace prepare for their match against Lync and Volt. 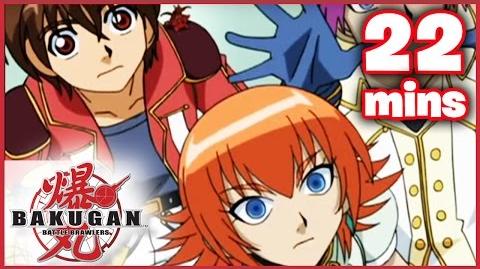