So far, it has only been seen in a store display that lists the Battle Planet Bakugan available to collect.

A Darkus faction creature with incredible endurance in battle. His favored strategy is to fight alongside others, using teamwork to take down opponents. However, he also battles fiercely in solo combat and is never one to give up. He can jump higher and longer than most Bakugan and uses his web snare to trap opponents. One weak point is his eyes in the middle of his body.

In Origin of the Species Part 2, Webam was used by Magnus Black, along with Fangzor, in assisting Nillious in Magnus battle against Dan Kouzo & the Awesome Ones.

In Nice to Meet You, Bakugan!, a Webam belongs to Emily Black owns a Haos Webam, but she colored her bakugan pink and added a pink bow on her head. 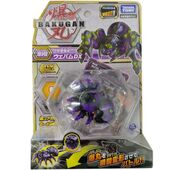