Dan Kuso and Ace Grit engage Mira Fermin, the ex leader of the Resistance and the newest member of the Vexos, and Gus Grav in a battle against their Mechanical Bakugan. During the battle, the new enemy of the Brawlers Resistance seems to be purposely losing. The other Brawlers have beaten the other Vexos, and arrive in time to see Kuso and Grit win, claiming the Mechanical Maxus Dragonoid Traps. (Baron Leltoy beats Volt Luster, Shun Kazami and Marucho Marukura beat Shadow Prove and Mylene Farrow, respectively). But when she loses the battle and recognize that she makes a huge mistake, Spectra's anger was uncontainable and uncontrollable for how Mira betrays the Vexos and himself, then he claiming that they have even stronger Bakugan than the ones that his "lapdog" and his "sister" used. The explosion of the Dimension Controller in Gamma City makes debris all on the Brawlers but luckily Drago and Ingram save them; finally Mira apologizes for betraying the Resistance, but they welcome her back into the group and continue with the journey. They next head to the Vestal Palace to free all the original Guardian Bakugan and save New Vestroia for good. 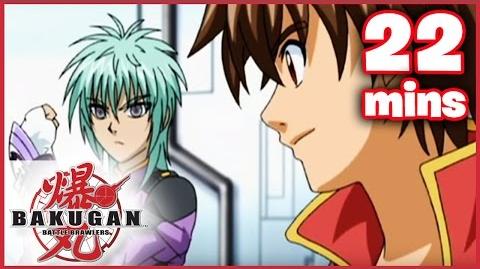 Retrieved from "https://bakugan.fandom.com/wiki/Wall_To_Wall_Brawl?oldid=762872"
Community content is available under CC-BY-SA unless otherwise noted.