There are a lot of mysteries involving the Bakugan toyline, a lot of them specifically was between seasons 2-4 of the anime. Let's discuss in this blog, i'll split it by sections.

First off we know that the minions of Naga like Rabeeder were never released, neither was Ultimate Dragonoid (although it may have possibly existed, as seen in a commercial?) 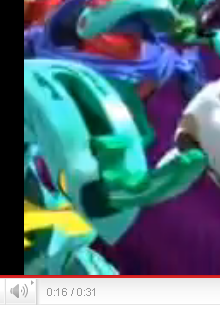 One sad thing is that the evolutions of the Resistance Bakugan like Knight Percival and Cross Dragonoid were never released in America.

What I think is they could have been scrapped or never planned to be made, although they exist in Japan. I'm sure it's because Sega wanted to make them, because to me they look way better than the other Bakugan produced for the New Vestroia toyline in my opinion. BakuTech also started appearing in Japan alongside the NV evolutions.

There were other Bakugan still never appeared even Japan such as Iron Dragonoid that were supposed to be part of the NV toyline. Those Bakugan eventually appeared as the Chaos Bakugan, but Flare Wilda had a prototype but never ended up being released.

The Vexos Mechanical Bakugan never were released (i really wanted them!) even in Japan.

Additionally, some Bakugan like Wontu and Hammersaur only existed in the anime, but Wontu specificallyinspired Zoobles. Perhaps those Bakugan could have planned to be released?

SpinMaster was "vocal" about releases. They had Dimensions and made YouTube videos showing the Waves of the Bakugan that will be released.

There was some exclusives still not appearing though (or were very rare to find), specifically the Battle Gear and Mobile Assaults. As far as I know, some Battle Gear like Destrakon Gear never appeared in NA despite it being set released in November/December 2010 according to the official YT channel. They did end up appearing in other countries like Japan though.

Another thing to add is Blitz Dragonoid looks different from the game compared to the anime, which is weird... wonder what happened there?

As for the Mobile Assaults, there was some like Cannonfury that were released in Europe during Gundalian Invaders and appeared in the Mechtanium Surge anime but never was in the shelves in America.

At this point it was clear there were production problems, I think they were planning on shuting down Dimensions which is why it in the anime Interspace was destroyed.

When season 4 was announced, Toy Fair 2011 showed almost the entire plan of what was going to be released for Season 4. As you can see in this video we can see that

I was able to find Wave 1 easily, when Wave 2 was released some Bakugan were very hard to find, and to this day I don't think Razen Titan and Faser Titan were released in large quantities because I never saw them.

Now things got better with Arc 2 when Sky Raiders started to be released, I could find them - but many were still wondering why Bakugan such as Krowll, Horridian, and Spyron were not released.

We all know that they used die-cast metal for Bakugan like Iron Dragonoid and Infinity Helios, but later on the metal seemed different, if you bought the Bakugan vs. Marvel packs the metal on Titanium Dragonoid is not the same as the one released in a single pack. In Arc 2 of Mechtanium Surge (anime) the die-cast metal doesn't appear, but the anime Bakugan still have metal features which don't appear in their toy versions. 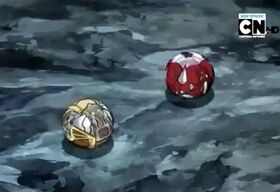 Additionally on the wiki we found out about new Mechtogan such as Flytris, which we found out were going to Mechtogan for Shun and Marucho. Bendo also found out an alternate Coredegon which then showed up in Beginning of the End. These mechtogan (Chromopod, Thorak, Flytris) did not get released in America and never were "officially announced". We also found images of Slycerak in a different attribute (at this time, the only way to get all 4 parts of Mechtavius Destroyer was in that pack and they were all Darkus).

And so the anime ended, but was the toyline dead? Kind of...

Bakugan like Horridian appeared on shelves in the form of Baku Lava Storm and Baku Camo Surge and Baku Cyclone Strike. As far as I know this was the last release in America. Bakugan like Horridian and Spyron appeared but they had different coloring, what happened to the regular ones? They do exist in real attributes and not special editions, but they are rare and appeared in other countries. Battle Suits also got the treatment, and Horridian started to appear in Bakugan Extension Packs despite it being limited to BakuFusion, Baku Sky Raiders, and BakuMine.

Bakugan vs. Marvel also had unreleased Bakugan such as Thor, but many years later it does indeed exist thanks to D4t

Furthermore Zachattack31 found out about BakuBlaster, which could have been a possible release in America but never did.

So that is the end of the toyline in America, luckily Bakugan wasn't over as Japan had BakuTech and continued the toyline until Bakugan officially was dead on May 2014 as Bakugan Armors failed... 4 years later Bakugan is coming back!

Let us dive deep in rumors we had, a lot of possible BakuNano to be released (but they probably never made it because it was a failure).

First off there was a bunch of BakuNano names nobody knew, these have been removed years later... but did they exist?

Some of these have evidence that they existed, as Reconblast appears on an ability card, but one interesting one is Snipeon (no idea where the name came from, but an image exists!)

What about Razenoid Destroyer? There used to be a page for it, but was deleted.. Perhaps it never existed or never was produced.

There was also two Mechtogan called Ventral and Troxtor which we still don't know if it was real or never was produced, Troxtor sounds like Roxtor which makes me think these two Mechtogan could have been summoned by Roxtor & Skytruss/Orbeum.

One final note is that Chromopod apparently exists, one of the members of the Discord ordered one and we should see an image too (2lazy to upload).

So that's it for this blog.

Retrieved from "https://bakugan.fandom.com/wiki/User_blog:Renardy/analyzing_the_production_of_the_Bakugan_toyline?oldid=693673"
Community content is available under CC-BY-SA unless otherwise noted.