Dimensions calls forth the most dedicated and skilled Brawlers to enter the first online brawling competi.tion, the BakuCup Tournament! Ready up your most powerful Bakugan team, claim victories, and battle your way for a chance to win ultimate prizes.

The tournament structure starts with a single qualification round between July 18th and July 24th. Any level Brawler with any level Bakugan can participate throughout the whole tournament. Simply log into Bakugan Dimensions and throw down as many battles as possible on any server, doing the best you can, in order to place in the top 32 positions on the in-game Leaderboard. As you battle throughout the week, check out your ranked position by traveling to Downtown and viewing the Leaderboard in the North side of the Plaza. The top 32 brawlers on the Leaderboards at the end of the week will be placed into the single-elimination playoff rounds on July 31st where they will duke it out to claim the ti.tle as the BakuCup Tournament Champion.

Certain restrictions apply, not all may be eligible to enter. The BakuCup Tournament is open to residents of the USA, Canada, and Australia. 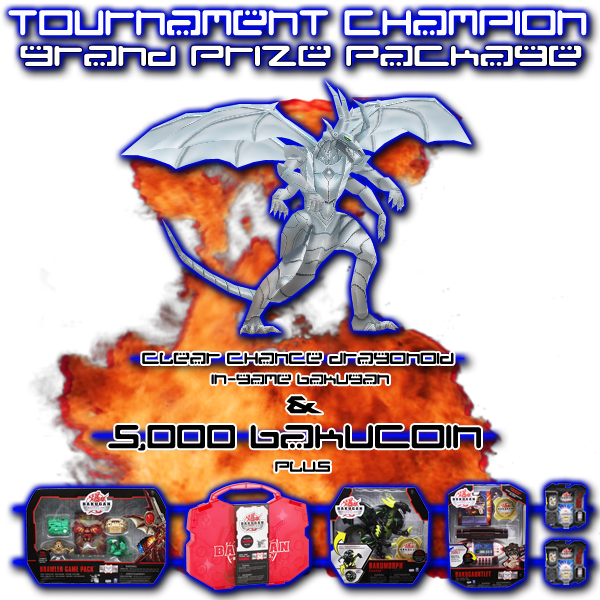 Prizes do not stack. Participants will win the associated prize package according to how far they get into the playoff rounds. Certain restrictions apply, not all may be eligible to win. The BakuCup Tournament is open to residents of the USA, Canada, and Australia.

BakuCup Tournament Structure The first round of the BakuCup Tournament is a qualification round. The Qualification Round starts on July 18th at 4:00am PST and ends July 24th at 10:00pm PST. During this round, brawlers will battle as many battles as they can, while doing their best, to rank and hold their position as one of the top 32 brawlers on the in-game Leaderboards. At the end of the Qualification Round, the top 32 brawlers on the in-game Leaderboards will be contacted by email with their designated playtime in the playoffs.

The BakuCup Tournament playoffs and finals will be held on July 31st, with the first round consisting of scheduled matches starting at 10:00am PST. The playoffs and finals will consist of single-elimination style rounds. For each round, the brawler who wins their match will proceed to the next round. The Final round consisting of the two last standing brawlers will be a Best of 3 match round to determine the Tournament Champion. Live playoff and finals brackets will be updated as soon as matches are completed. Click here to access the BakuCup Live Playoff Bracket.

Participants who make it to the playoffs must show up on time to play their scheduled match. Playoff and final matches will be scheduled by the Bakugan Dimensions Tournament officials. No exceptions or preferred game times will be made. For more details on tournament rules and structure, refer to the BakuCup Tournament Official Rules.