Unlocking the Gate is the 19th episode of Bakugan: Mechtanium Surge. It aired on June 26th, 2011.

With the war turning on the Chaos Bakugan, Linehalt, Aranaut, and the other Bakugan are trying to defend against them. While that is happening, Nurzak and Fabia talk about the War between Mag Mel and Gundalia. Nurzak speaks up and says that their next target will be Neathia if they are able to take Gundalia down. Fabia ensures him that the Battle Brawlers will definitely succeed because the Sacred Orb chose them.

After the fall, Rafe and Dan get separated from Shun, Marucho and Paige. The Chaos Bakugan come after them and Rafe doesn't know what to do, wishing that Marucho and Shun were there to help them. Dan then tells Rafe that he will handle it and tells Drago to use Dragon Blazer on the roof and rocks tumble down which trap the Chaos Bakugan. Rafe is then amazed about what Dan and Drago just did and asks how he knew that. Dan says that he has learnt some things over the past few years. Dan then decides to go after Mag Mel and Razenoid. Rafe is suggesting that he should follow Dan but Dan rejects the idea. Rafe then get mad and Dan explains everything to Rafe including the Gate and Key they have. Rafe then asks what is the Gate and Key and Drago say that their not really sure themselves. In the end, Dan becomes convinced and decides to trust his friends. He also realizes that they were trying to help him. Dan then tells Rafe to go to find the other Brawlers so they can help him while Dan goes after Mag Mel himself.

Meanwhile, the rest of the team is having trouble during the battle against the Chaos Bakugan and Marucho wishes that Dan was here. Rafe then arrives and uses a BakuLaunch to throw Wolfurio which he is able to defeat most of them. Taylean then defeats the rest with Slash Rise Thunder. Rafe then says that Dan went to look for Mag Mel and the Brawlers say that he is just mad because Marucho is now the Leader of the Battle Brawlers. Rafe then says it's more than that and he truly cares for the Brawlers. Shun then asks if he heard right and Marucho starts to cry. Rafe also mentions about the Gate and Key which Marucho remembers hearing Mag Mel mentioning it and he knew that he would be after it.

Dan eventually finds Mag Mel and the masked villain explains the origin of their links. Mag Mel says that his link is a mutated link from Code Eve and his Gate and Key are incomplete. Also, Mag Mel and Razenoid share their bond with Dan and Drago because they are from the same origin. He needs the Gate and Key from Titanium Dragonoid and Dan to become whole again alongside Razenoid and possibly become more powerful than Code Eve so he can rule all Bakugan in the world. He then summons six Mechtogan: Braxion, Smasheon, Rockfist, Deezall, Venexus, and Miserak with just a point to the sky. Sellon and Anubias appear when the six Mechtogan are summoned and at the nick of time, the rest of the Brawlers arrive.

All the Brawlers forgive the differences with Dan who begins to battle against Mag Mel. The Mechtogan overwhelm the others so Dan and Drago share their powers with the others and to make them summon their own Mechtogan: Silent Strike for Taylean (Shun), Vexfist for Boulderon (Paige), Accelerak for Trister (Marucho) and Swift Sweep for Wolfurio (Rafe). Mag Mel then says that he is not smart to share his powers with the other Brawlers so he and Razenoid summon Dreadeon, while Dan and Drago summon Zenthon. They begin to fight as the brawlers Mechtogon defeat the opposing Mechtogan except for Smasheon and Rockfist. Mag Mel orders Smasheon and Rockfist to fight Dan. Out of the blue, Spectra arrives on Gundalia with the Vestal Destroyer. He sends out Helios and summons his BakuNano Bombaplode, which he uses to defeat the two Mechtogan. Mag Mel then summons more Chaos Bakugan and Razenoid kicks Drago down. He begins to take the Gate from Drago, but is stopped by him. He and Dan then activate the Gate and Key. They then use an ability, "Dragon Maximum Striker", which seemingly destroys them. Gundalia is safe and Dan waits for his punishment. However, Shun instead welcomes Dan back to the team, returning to his position as the leader of the Brawlers. Dan thanks Spectra and Helios, who tell him to call them anytime they need help. The Vestal Destroyer then leaves.

Everyone is happy, but suddenly, Drago's Gate appears and is changing color from light to dark constantly. He then feels that Razenoid is still alive and it is revealed that he took a fragment of the Gate's immense power and became whole. Mag Mel then awaits to take the Key's immense energy and power from Dan, in order to become whole again and achieve his goal. 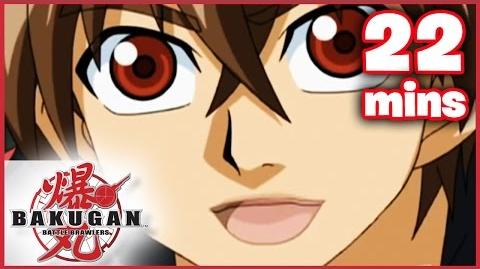 Retrieved from "https://bakugan.fandom.com/wiki/Unlocking_the_Gate?oldid=762312"
Community content is available under CC-BY-SA unless otherwise noted.