Unfinished Business is the 22nd episode of Bakugan: Mechtanium Surge. It aired on July 17th, 2011.

Having both the Gate and the Key, Mag Mel is very close to his resurrection. However, he still only needs Dan's portion of Code Eve in order to begin his plan.

Meanwhile, Dan and Shun are continuing to defend Interspace against the Chaos Bakugan. Shun then comments that now that Mag Mel has both the Gate and the Key, they need to find out what his next move is. Dan agrees and suggests that they should to take down the Chaos Bakugan twice as fast so they can find Mag Mel. They then hear some more Chaos Bakugan arriving, so they split up to take them out.

Meanwhile, Team Anubias is trying to find a way to escape. Jack then reflects on how Anubias tricked them, much to the dismay his teammates. Ben says, to not mention him again and as Robin declares that Anubias is gone, and that they are on their own now. Then suddenly, Anubias arrives and kidnaps Noah.

As Drago defeats the last Chaos Bakugan that is there, Dan receives a transmission from Noah, but is shocked to see Anubias on the other end. Anubias then tells Dan to meet him in the arena in the middle of Bakugan Interspace so they can settle their score. Shun and Taylean overhear this conversation and Taylean wonders if they should stop him from going, but Shun does not answer.

Meanwhile, Anubias decides to free Noah, having already goaded Dan into battling. Dan then arrives for the battle, and Noah and Shun watch. Anubias then throws out Horridian, Bolcanon, and Krakenoid and Dan throws out Drago. Drago manages to make quick work of Bolcanon and Horridian, but Anubias suddenly throws out Krowll, much to Dan and Drago's surprise. Anubias then fuses the two into Mutant Krakenoid and Mutant Krowll. Mutant Krowl then traps Drago with Haos Hydra. Dan and Drago respond by summoning Zenthon and he frees Drago and defeats Mutant Krowl. Anubias, as a result, summons Smasheon, Venexus and Deezall. Dan then summons Zenthon Titan, who easily defeats Smasheon and Deezall. Anubias then summons Venexus Titan, and he and Zenthon Titan begin fighting, but are evenly matched. Determined not to lose, Anubias pushes his power to his limits and destroys the bracelet on his arm. Mag Mel then receives a surge of energy from the battle and steps in to absorb his energy. Shun tries to stop Dan from trying to save Anubias as he would get absorbed as well, but Dan goes anyway and is unable to do anything as Mag Mel is too strong for Anubias and he is consumed by Mag Mel.

Back on Interspace, Noah still can't believe that Anubias is really gone while Dan consumes too much hatred for revenge and decides to destroy Mag Mel once and for all. 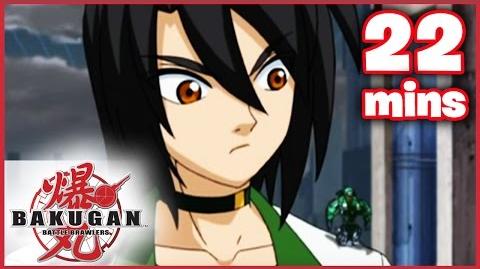