Underground Take Down is the 22nd episode of Bakugan: New Vestroia. It aired on October 3, 2009.

Mira and Spectra are called to meet with Prince Hydron, who shows Mira his collection and later receives a message from his father, who is angered by the destruction of the other two controllers. Hydron then orders Mylene to divide and conquer the Resistance, since she has shown that they are weaker on their own. He also orders Lync to keep an eye on Spectra and to make sure that his new Mechanical Bakugan is ready for battle. The Resistance arrives and Ace and Baron explain that the controller is underground and is the most powerful out of all the other controllers. They all head in, but they encounter Volt. Baron deals with Volt while the others proceed, discovering that Gamma City is not a real city, but a research facility. All of a sudden, Shadow Prove and Mylene appear, and Shun and Marucho step into battle. Spectra takes Mira to see a team of special Mechanical Bakugan that he and Professor Clay had designed themselves and that they were intended for Hydron, but Spectra intends to make certain that they only obey him. Spectra then orders Mira and Gus to use the Bakugan to battle Dan and Ace to collect data on Drago and Percival. Meanwhile, the others gain the upper hand against the Vexos. Dan and Ace continue to the controller but encounter Gus and Mira. Ace is shocked that Mira has truly betrayed them. Gus orders Mira to prove that she really is loyal to Spectra by brawling.

Baron throws out his Gate Card.

Some of the brawl is skipped. The focus is shifted back to Marucho, Shun, Dan, and Ace who encounter Mylene Farrow and Shadow Prove. Marucho and Shun decided to brawl against Mylene and Shadow, letting Dan and Ace move on.

Mylene throws out her Gate Card and Elico. (Power: 500 Gs)

Shun and Marucho win this Round 1.

Shun throws out his Gate Card and Ingram. (Power: 400 Gs)

Most of the brawl is skipped. The focus is shifted back to Baron and Volt's brawl. Baron is unable to activate any of Nemus' abilities because of Volt's Jeer Frontier ability.

Baron activates the ability Soliton Deflector to half the effect of Volt's ability. (Piercian: 150 - 250 Gs)

Baron wins Round 2 The focus is shifted back to the beginning of Round 2 in Shun, Marucho, Mylene, and Shadow's brawl.

Marucho then changes Elfin's attribute to Ventus and uses the ability Jamming Out to reflect Shadow's ability back to Elico. (Elico: 500 - 200 Gs)

The battle is continued on the next episode. 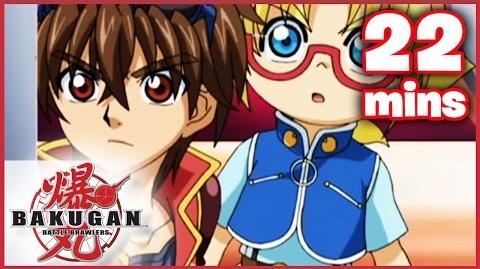 Retrieved from "https://bakugan.fandom.com/wiki/Underground_Take_Down?oldid=762224"
Community content is available under CC-BY-SA unless otherwise noted.