Ultimate Bakugan is the 24th episode of Bakugan: New Vestroia. It aired on October 4, 2009.

With Mira returned, and the Resistance reunited, Dan and the others head for Prince Hydron's sky palace to free Skyress, Tigrerra, Preyas, Gorem and Hydranoid from captivity. But before they can even get close enough, Hydron activates another Dimension Controller, which causes the Bakugan to turn back into ball form. Quickly thinking, Shun grabs Mira and Marucho and grapples to the top of a rising elevator and to safety. Down below, Dan, Baron and Ace are saved just in time by their Bakugan. But before they can think of a way to get up to the palace, Spectra and Cyborg Helios challenge them to a battle. As Dan and Drago struggle to fight back against the power Helios now possesses, while Shun, Marucho and Mira have managed to sneak into Hydron's throne room and discover the bronze statues of the five other Guardian Bakugan just before meeting face to face with Prince Hydron himself. Meanwhile, Mylene, Volt and Shadow Prove order Professor Clay to give them an escape off of New Vestroia, as the energy from the battle between Helios and Drago could destroy everything around them. Professor Clay at first refuses saying that it would be treason, when Shadow Prove reminds him that he works for the Vexos now. Gus overhears their plan, but before he can warn his mentor, Lync hits him over the head and knocks him into a room, locking Gus inside so he can't tell his master of their plan. Back with Dan and Drago, Spectra having underestimated the Perfect Core's power has used the Mechanical Bakugan to make Maxus Helios, a Bakugan who has all six Attributes. Dan tries to use a combination of Ability Cards that tap into the Perfect Core's power, but still can't match Maxus Helios' power. Dan realizes he has no choice, but to use the Bakugan he got from his battle with Mira and Gus (alongside Ace) to make Maxus Dragonoid just as Spectra has again used the other six Mechanical Bakugan on Helios. The two Bakugan face each other, preparing for the battle. 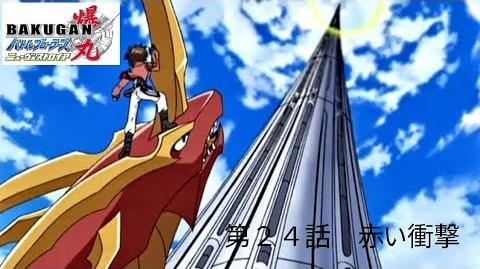