Twin Evil is the 13th episode of Bakugan: Gundalian Invaders. It aired on August 15, 2010.

With Drago receiving the Element from the now departed Neo, the Brawlers decide to head back to Neathia to help fight off the Gundalian forces. Before they can do so, Dan must say goodbye to Julie. Meanwhile, Ren sends Zenet to steal the Element back via trickery. So she disguises herself as Julie and tries to take Drago. However, her plan is foiled when the real Julie shows up, throwing Dan and Drago into confusion. However, when he reveals he is leaving for Neathia to help fight the real Julie expresses that she is ok with it and hopes they succeed, assuring Dan that she is the real Julie. Zenet is forced to reveal herself and battles Drago. She tries to trick Drago by transforming Contestir's appearance, but Drago overpowers her with his new Battle Gear Cross Buster. Zenet retreats and informs Ren that the Brawlers are heading to Neathia. Ren runs to them before they go, but arrives just as they leave with Julie cheering them on commenting that they will meet soon again.

Dan activates the ability Cross Barnum (Drago: 1000 - 1500 Gs). Evil Twin Coredem changes back into Contestir and gets knocked out.

Dan wins this round 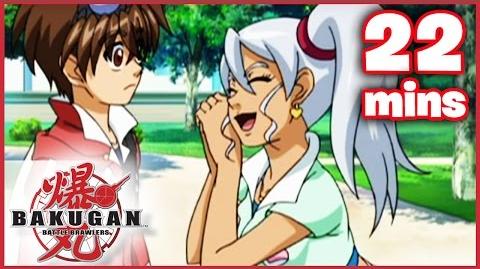 Retrieved from "https://bakugan.fandom.com/wiki/Twin_Evil?oldid=762267"
Community content is available under CC-BY-SA unless otherwise noted.