Twin Attack is the 9th episode of Bakugan: Gundalian Invaders. It aired on July 18, 2010.

Dan and the others have been forced out of Bakugan Interspace, and Ren has taken control. However, it seems that they were the only ones kicked out, as other kids continue to log on without knowing what is going on. To make things easier, Marucho, Shun, and Fabia head over to Dan in Bayview aboard Marucho's giant airship. Dan tries to enter Bakugan Interspace, but is rejected. He tries to tell the other kids about the danger, but none of them believe him. Marucho is unable to shut it down as Ren has complete control, so Jake tries brute force, which actually works. Marucho takes them to a remote access room, so they can plan their next move. Fabia remembers that the Neathian Bakugan can body shift themselves into Interspace. Dan immediately wants to go, but Drago reminds him that he does not have that same power. So, Jake volunteers and brings Dan along using Coredem's power. Dan and Jake witness brainwashed kids take back more kids to Gundalia. The same two brawlers who accused Dan of lying reappear, now brainwashed by Gundalia and battle Dan and Jake. Dan and Jake easily secure victory as well as the opponent Bakugan, and in the process of the battle, Coredem refers to Drago as his brother. The two boys are released from Gundalian control and Dan and Jake take them out of Bakugan Interspace. Dan vows to rescue all the brainwashed children.

Note: Coredem's attribute was already Subterra before Jake opened the Gate Card it is unknown why he chose the attribute. 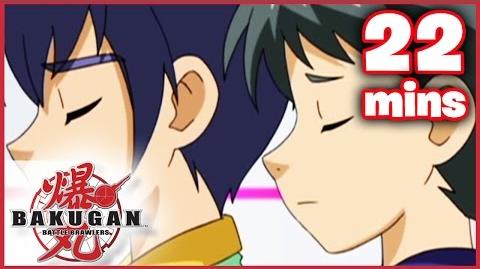