True Evolution is the 31st episode of Bakugan: Gundalian Invaders. It aired on November 20, 2010.

After being split up from Marucho and Shun, Dan is challenged to a battle by Emperor Barodius. He is eager to challenge them to a battle for the power of the Sacred Orb. Thanks to his new evolution, Drago manages to hold his own against Dharak, but struggles to defeat him. Dan pulls out Jakalier and a new Battle Gear known as Axator Gear, but Dharak destroys them both. Dragonoid Colossus then tells Dan that Drago and Dharak are evenly matched because Drago has yet to attain his true evolution. Dan asks how to evolve Drago into his true evolution, but Dragonoid Colossus remains silent. Drago then gets discouraged, but Dan tells him that they can win it together. With that Dragonoid Colossus gives him a new Ability Card as a sign of him reaching his true evolution and Dan uses it to defeat Barodius. After winning Dan demands that Barodius returns Jake and he does so, but Jake is still hypnotized by the Gundalians and tackles Dan. Meanwhile, Nurzak suggests that he and his group split up into two smaller groups to attack Kazarina's lab as they no longer have the element of surprise. Nurzak and Fabia form one group leaving Ren and Mason as the other group. They then decide to launch a two-pronged attack on the lab in order to have an advantage. However, Nurzak and Fabia are ambushed by Kazarina and Stoica and the four of them get ready to battle. 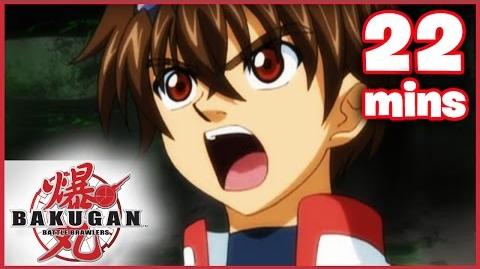