True Colours is the 20th episode of Bakugan: Mechtanium Surge. It aired on July 3, 2011.

After the battle in Gundalia, Mag Mel desires the Key from Dan even more now. He also mentions that Razenoid will soon awaken (where he is inside some sort of cocoon) and he will soon become fully whole. Mag Mel then sends Anubias and Sellon to retrieve it. As Sellon desires to look good in front of Mag Mel, Anubias desires to destroy Dan.

While Mag Mel is sending Anubias and Sellon to retrieve the Key from Dan, Queen Fabia and Nurzak thank the Battle Brawlers for their work against Mag Mel. Afterwards, Marucho then get a distress call on his BakuMeter, coming from Bakugan Interspace. The Battle Brawlers then say they have to go and Nurzak and Queen Fabia say if they need any help from Gundalia or Neathia just come and ask. They then head through a Dimension Portal but at the end, there is an electrical shock which makes them have a very hard landing.

Meanwhile, outside of Bakugan Interspace, Kato and Marucho's dad try to find a point to get any remaining battlers out of the system. Team Anubias then shows the Brawlers that they managed to round up the remaining battlers into a room. All of a sudden, Chris and Soon fall through the roof and land in the same place. Dylan then explains that when the Brawlers headed to Gundalia, the Chaos Bakugan began to invade Bakugan Interspace again. He also said that some noble brawlers tried to fend them off but they were unsuccessful. Marucho then realizes that because the Chaos Bakugan were destroying the area, the mainframe was damaged and that's why nobody can't get out. Luckily Kato finds another teleporter that is still intact and sends it to Marucho. Marucho then tells everyone and everyone then agrees to go there. Chris is also very worried about Sellon and says to Soon that they should send a message to her about where they are going. Soon says it's a great idea and she sends the message to Sellon.

Since the Chaos Bakugan are in the center of Interspace, they plan to go around the area. Dylan appears again and begins to taunt the Brawlers. The group get furious at him and he reveals it is his job. He then takes off his glasses to reveal green technological eyes and that he is a robot created alongside Bakugan Interspace. He said that he created the BakuNano's and the Battle Gear to use in Interspace to create more heat and that he was created by Marucho.

The Chaos Bakugan then find them but they are saved by Horridian. Anubias and Sellon arrive and their eponymous teams are happy to see them. However, their Leaders mock them for being stupid and they turn into their true forms - Anubias being a Gundalian, and Sellon being a Neathian. They insult their teammates which hurts Noah a lot and they reveal that they are artificial beings created by Mag Mel to aid him with his resurrection. They begin a fight after Rafe and Paige escort the battlers to the Access Point. Anubias and Sellon use their "Team's" Bakugan and the Brawlers try to protect the Key. Anubias then tries to destroy Dan and Sellon tells him that their trying to retrieve the Key not blowing it away. He says Sellon to be quiet and summons Deezall and Rockfist. They then attack them but Rafe and Paige come and summon Vexfist and Swift Sweep. The groups then fight and defeat Sellon and Anubias. The final blow from Shun against Sellon caused them to teleport away.

The group arrives at the access point but now the point was damaged because of Shun and he apologizes. The other battlers start to lose hope and it begins to rain in Interspace. The problem is, Interspace wasn't programmed to rain. 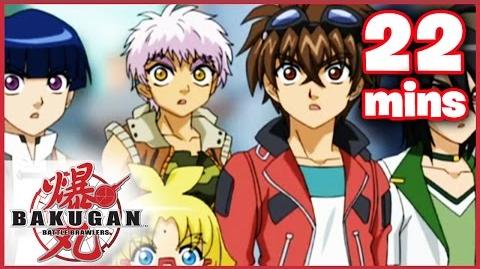