Trox (トゥロックス, Turokkusu?) is a Tyrannosaurus rex-like Bakugan that appears in Bakugan Battle Planet. He is the Guardian Bakugan of Wynton Styles. A Pyrus Trox also appeared, controlled by Wynton's doppelganger.

Trox is unbelievably strong & loyal to Wynton. The two are a well-oiled machine in terms of how they battle. Despite looking like a raging dinosaur, Trox is thoughtful & strategic… unless he starts to lose or is in pain. Then, his beastly side comes to the forefront. With enough practice, Wynton & Trox might be a match for Dan & Drago… maybe.

Wave 2 of "Battle Brawlers" introduced Trox Ultra, whose magnet is located on his chin. Ventus, Aquos, and Diamond versions of Trox Ultra have been found. 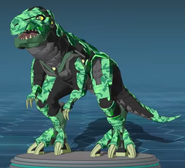