In Bakugan Interspace, Rafe and Paige win a battle, and the rank for the Battle Brawlers is going back up. With their new ranking, they will face of with Team Anubias in a 2 vs 2 match. Marucho vows to defeat them to get rid of the violence which leads to flashbacks of Bakugan using BakuNano.

Meanwhile, on New Vestroia, Dan and Drago are training and they both think that they are in sync. Drago says that he wants to try a round with Zenthon. Drago then tries to summon Zenthon, however, during the process, Dan sees a violent vision of Razenoid commanding a whole bunch of Chaos Bakugan to attack Bakugan Interspace. Then, Razenoid summons a portal which leads to Bayview and attacks with a powerful attack. Dan is then about to faint but Drago catches him just on time. Afterwards, Sellon suddenly arrives.

While in New Vestroia, Sellon reveals she is working for Mag Mel but she doesn't reveal her identity. She also says that the guy from before, Anubias, was also a servant but does not reveal his identity either and Dan was shocked. Sellon then commences the battle, summoning one Haos, one Ventus, and one Subterra Iron Dragonoid while Dan uses Titanium Dragonoid. They are all quickly defeated by Titanium Dragonoid's Dragon Force Striker and Sellon said that was incredible. Then, Sellon summons six different attributed Flash Ingrams which all have BakuNano Shoxrox. Later, when Dan says that the only way to defeat all the six Flash Ingrams is to use Dragon Force Striker, Sellon's Haos Flash Ingram nullifies all Drago's abilities so Dan says if they can't use abilities, they have to summon Zenthon. They then focus to try to summon Zenthon and they are successful. The six Flash Ingrams then attack Zenthon with the BakuNano's but Zenthon retaliates by defeaing 5 of the Flash Ingrams and Drago defeats one of them barehanded. Zenthon then speaks and thanks Dan and Drago for creating him and letting him do his job. Sellon then gets angry and summons three Mechtogan: Deezall, Rockfist and Miserak.

During the battle between Dan and Sellon, Deezal, Rockfist, and Miserak attack Zenthon brutally. Mag Mel is then seen getting massive amounts of Chaos Energy. Later when Miserak, Deezal, and Rockfist activate their lasers Dan is thrown back and sees a vision of Shun and Marucho vs Anubias and Robin. Zenthon then get attacked by Rockfist and Deezal when Zenthon is down. When Zenthon is down Drago says that their going to pay for that but Dan says to Drago, we have to stay in sync. They then convince Zenthon to get up and they then become all synchronized with each other. The bond between Dan, Titanium Dragonoid and Zenthon is used to summon a Mechtogan Titan called Zenthon Titan. Zenthon Titan then defeats Miserak, Deezal, and Rockfist with ease and then Sellon tells Dan and Drago that they can keep their Gate and Key. Sellon also mentions that the end of the world is still coming and Dan and Drago ask whats she's talking about but she teleports back to Earth and reports back to master Mag Mel.

During the other battle between Shun and Marucho vs Anubias and Robin, Shun and Taylean defeat Bolcanon with Horridian remaining. However, Mag Mel nearly has enough energy to break free and a scene of Mag Mel with Razenoid and Razen Titan is shown. Suddenly, rogue Chaos Bakugan start invading Bakugan Interspace and begin destroying everything in sight, while Anubias states: "It's the end!" with an evil smile.

Anubias and Robin vs Shun Kazami and Marucho Marukura. No Outcome.

Ben and Jack Punt vs Rafe and Paige= No outcome 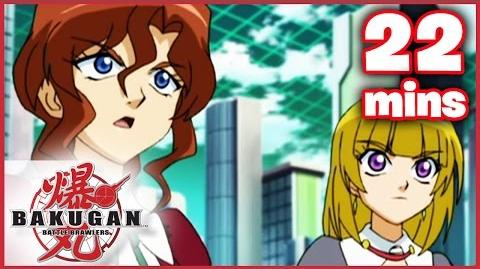