Noble and true… and maybe a little overly committed to achieving greatness, Dragonoid is in many ways King of all Bakugan. Or on the pathway to becoming. Right now, he’s a prince still earning his wings. Drago is extremely selective about his human partner, and is happy to have chosen Dan… most of the time. He is a passionate fighter whose style is a perfect match for Dan’s instinctilight showforce approach.

It was the night of the Great Collision when the Bakugan awakened, and Dan, Wynton, Lia, and Lightning were there to watch the lightshow, trying to prove if it ever actually happened. To Dan Kouzo's surprise, he found Drago there and learned how to get him out of Ball Form. Initially, Dan was freaked from Drago's transformation, but the two made a pact to become great friends and become the best Bakugan Brawlers ever. Early in, Drago was always pumped and looking for a chance to battle other Bakugan every chance he got, but soon learned that in order to get better, he needed to practice his abilities and become stronger. Dan and Drago rarely battled alone in the first season, usually accompanied by Trox, Gorthion, Howlkor, or Hydorous.

The Core Pyrus Dragonoid has 200 BB-Power and comes in a single pack with 2 BakuCores, a booster pack with two other Bakugan and 6 BakuCores, and also a case with 2 BakuCores. An Aquos version comes in the Bakugan: Battle Planet arena with a B-Power of 400. There are also Haos, Ventus, Darkus and Aurelus variants of his Core form. There's even a rare Diamond variant of Dragonoid Core. His B power is printed on the back of his right shoulder. His Ultra form was released in a single pack in Pyrus in wave 3 of "Battle Brawlers". A toy fair revealed that there woukd be a Diamond version of Draganoid Ultra available soon as well. 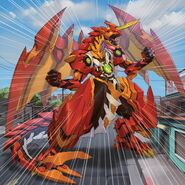