Tiko is a faun/dragon hybrid-like Bakugan and the former main antagonist of Bakugan Battle Planet. Tiko appeared as an evil Aurelus Bakugan, due his corruption by the V Virus. As of Bakugan: Armored Alliance Tiko has been completely cured from the V Virus.

Acting as the greatest enemy of the Bakugan, Tiko seems to set regards on corrupting Core Cells into order to cosume light and bring imbalance to Vestroia which that suggests he's highly destructive and power-hungry.

He's also extremely manipulative as shown he used Magnus in order to defeat Dan and now currently using Benton's knowledge to control Vestroia. He was once a Aurelus Bakugan and a member of the Supreme Council.

After the final battle, Tiko has been completely cured from the V Virus and has regained his senses and hopes for humans and Bakugan to live together in peace.

Before the Great Collision, Tiko was a member of the Bakugan Council, who was in charge of protecting Core Cells. Tiko thought that Bakugan Battles were cruel, evil, and making Bakugan suffer greatly. After a failed attempt to get help from the other Council members, Tiko created the V Virus as a solution for Bakugan Battles. However, Tiko's solution became his problem, as the V Virus corrupted his mind and turned him evil along with other Bakugan who got infected with it (Bakuzon). Now turned into pure evil, Tiko decided to claim all of the Core Cells' power and rule Vestroia with an army of Bakuzon, which lead to the War of Vestroia.

Tiko appeared in Midsummer Nightmare, but as a dream. He is seen attacking Drago and the other Bakugan on Vestroia.

In Matter of the Mind and Core Cell (episode), Tiko made his physical debut as he infected most of AO's Bakugan with the V Virus and later attempted to infect a Core Cell as well. He almost succeeded, but was stopped by Dan Kouzo and Hyper Dragonoid.

Tiko was only mentioned throughout the series so far until Tiko's Back?!.

It was revealed in Tiko's Back?!, Tiko was permanently cured from the V Virus. 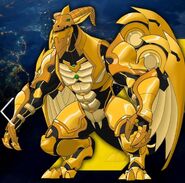 Corrupted Tiko in his Bakugan form

Purified Tiko in his Bakugan form