The Visitor is the 3rd episode of Bakugan: Gundalian Invaders. It aired on June 6, 2010.

As Ren identifies three more Neathian moles, Princess Fabia of Neathia arrives in Bakugan Interspace, looking for the recipients of the Phantom Data. She brawls Koji and wins. Dan, having slept in, rushes to Bakugan Interspace and, quite literally, runs into Fabia. Fabia learns that Dan is the top brawler in Bakugan Interspace, but before she can ask about her message, he rushes off to meet his friends. He tells them about the girl he just met, and Ren suspects she may be a spy from Neathia. Before they can track her down, Fabia arrives and is shocked to find that Ren, a Gundalian, has gained their trust first. Now that Dan has sided with the Gundalians, Fabia claims that they are her enemy and a battle ensues. Dan quickly takes the lead, but falters when the Princess summons Haos Aranaut, the original Aranaut from which the clone originated. Marucho concludes that the clones were all of Neathian Bakugan, and are therefore their enemies. Shun, however, begins to question his affiliation with the Gundalians. Defeated, Fabia leaves the arena and wonders what to do now that Dan has sided with the Gundalians. While the others congratulate Dan on his victory, Shun disappears to ask Fabia about her side of the story.

Fabia opens her Gate Card (Haos Saver), but Koji nullifies it with the ability Crush Cluster.

Koji opens his Gate Card (Active Ghost), but Fabia nullifies it with the ability Conjure Light.

Dan now finishes with his Battle Gear Ability Jetkor Delta (Drago: 1500 - 1750 Gs). Drago attacks Aranaut and he gets wiped out.

All Main Heroes Are Present in this Episode. 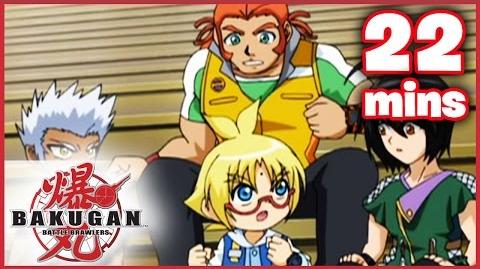