The Secret Switch is the 16th episode of Bakugan: Gundalian Invaders. It aired on September 5, 2010.

Dan, Fabia and Shun continue on their way through the forest to the second shield generator, while fighting off an onslaught of carnivorous plants. Soon enough, they run into Stoica and Jesse Glenn. Shun continues ahead, while Dan and Fabia remain behind to deal with the Gundalians. A battle quickly ensues between Fabia and Jesse, both her and Aranaut eager for revenge on Jesse and Plitheon for there loss back in Exposed. After Fabia secures a win, Stoica steps in who quickly deduces that Fabia and Dan are distracting them due to him not participating in the battle. However, it looks like battling two Gundalians takes its toll as Aranaut begins to struggle. Dan finally steps in revealing that he is in possession of Hawktor and not Drago. Stoica and Jesse retreat in defeat as Shun and Drago arrive just outside the Shield Generator.

Dan & Fabia win this round

Fabia activates the ability Mirage Jet, but its no use due to Eel Weakness.

Fabia sends out her Battle Gear: Battle Crusher and equips it to Aranaut. (Aranaut: 500 - 600 Gs)

Dan & Fabia win this round 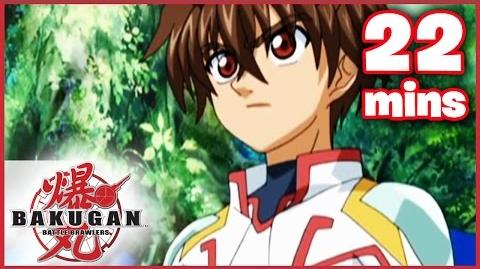