The Secret Package is the 11th episode of Bakugan: Gundalian Invaders. It aired on August 1, 2010.

The Gundalians are easily overpowering the Neathians, thanks to the brainwashed brawlers that Ren got from Bakugan Interspace. In a last desperate attempt, Captain Elright sends Castle Knight Linus to Earth to give Fabia the Element. The Element is the very thing the Gundalians are trying to take from the Neathians. As security tightens for the Brawlers, their attempts to bring kids out safely are getting more difficult. However, many of the kids believe Dan and the Brawlers over their wanted announcement. After Shun returns from saving more kids, he runs into Linus who is looking for Fabia. Though reluctant to trust him at first they are attacked by Ren and Jesse and a battle ensues. Linus' partner Neo Ziperator displays incredible power, but the battle eventually goes to Jesse who takes Neo Ziperator as his victory prize. Linus is taken back to the others after being injured during the battle. He tells Fabia that having lost Neo Ziperator to the Gundalians he has also lost the Element leaving Neathia doomed.

Jesse sends out his Battle Gear: Vilantor Gear and equips it to Plitheon. (Plitheon: 500 - 600 Gs)

Ren activates his Battle Gear Ability: Boomix Lock, but Linus manages to nullify it by opening his Gate Card (Explode) and bring Neo's power level back to base level. (Neo: 500 - 900 Gs)

Shun & Linus win this round

Ren activates his Battle Gear Ability: Boomix Lock but Shun nullifies it with the ability Sky Fang, Cyclone Soar before it even comes into effect.

Jesse then immediately sends out his Battle Gear: Vilantor Gear and equips it to Plitheon. (Plitheon: 800 - 900 Gs) 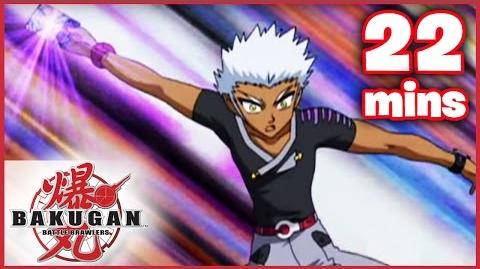