The Sacred Orb is the 14th episode of Bakugan: Gundalian Invaders. It aired on August 22, 2010.

The Twelve Orders berate Ren Krawler, Jesse Glenn, Mason Brown, Lena Isis, and Zenet Surrow for failing to bring the Battle Brawlers over to their side. Nurzak points out that since the Brawlers have allied themselves with the Neathians, the Gundalians have lost their advantage over the Neathians. Gill suggests to Barodius that they organize a preemptive strike assault on Neathia, who likes the idea and puts the plan into motion.

Meanwhile, the Brawlers arrive on Neathia and Fabia Sheen introduces them to her sister and Queen of Neathia, Serena. Serena shows the Brawlers the Sacred Orb. The bralwers then go into battle against the Twelve Orders. After that they are knighted as members of Neathia's Order of the Castle Knights, ready for the battle against Barodius and the Twelve Orders in Gundalia. 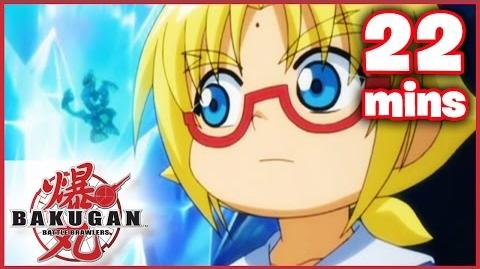