The Prodigal Bakugan is the 30th episode of Bakugan: Mechtanium Surge. It aired on October 1, 2011.

At the beginning of the episode, it shows Shun and Jaakor training together on the element of surprise. After they are done, Shun leaves, while Jaakor stays to meditate. Soon after, Orbeum and Skytruss make a debut appearance and ask Jaakor to go with them back to New Vestroia so that they could protect the Bakugan who are heading back. Jaakor states that he needs time to mediate on this so they leave, Shun overhears the conversation and makes a decision to let Jaakor leave. Jaakor then has a talk with Shun and they decide to part ways so Jaakor could protect his family. Shun is soon confronted by Wiseman and his Bakugan Spatterix and Stronk. The two Bakugan fight Shun and Shun is able to hold his own for a while until they gain the upper hand. Jaakor is about to leave until he has a feeling that Shun is in trouble. Jaakor aids Shun in battle and was able to take on Spatterix and Stronk. The two Bakugan fuse together to create Scorptak and their combined power was able to take down Jaakor and his students. Jaakor then has Orbeum and Skytruss to fuse with him and they become Magmafury, with their combined power they defeat Scorptak forcing Wiseman to leave. Wiseman remarks that he is learning more about the brawlers each time he fights them. Orbeum and Skytruss then go to New Vestroia to help protect the Bakugan there. 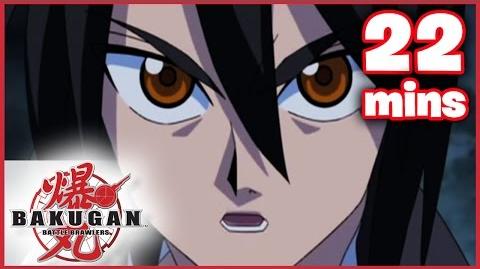