Here's Mud In Your Eye

The One Hit Wonders is the 46th episode in Bakugan Battle Brawlers. It aired on December 14, 2008 in English.

Naga's hybrid soldiers invade Earth and come to take the Infinity Core from Wavern. Quickly, the Brawlers split up to stop them from reaching Wardington. Marucho finds himself confronted by Tayghen again. They battle against each other with Jenny and Jewls coming to assist Marucho in battle. Fans arrive to cheer the JJ dolls on. After the battle is over with the brawlers finishing victorious, Marucho receives a kiss from his famous female music duet. 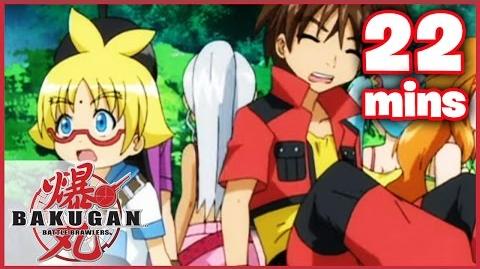 Retrieved from "https://bakugan.fandom.com/wiki/The_One_Hit_Wonders?oldid=756278"
Community content is available under CC-BY-SA unless otherwise noted.