The Eve of Extermination

The Eve of Extermination is the 37th episode of Bakugan: Mechtanium Surge. It aired on November 19, 2011.

After the Brawlers were defeated, in their HQ, Dan asks Mira if Dragonoid Destroyer is okay, Mira reveals that Dragonoid Destroyer has 70% of his energy not on reserve and the other 30% is on reserve, But Dan questions why Dragonoid Destroyer is not using full power as it probably would have defeated Mechtavius Destroyer. It is also revealed that he will be unable to battle for 18 hours. Dan becomes frustrated, knowing that the Brawlers can't succeed without him, which leads to a fierce argument between Dan, Marucho, and Shun, the latter two arguing that they can win without Dragonoid Destroyer. Runo then breaks up the fight. Later that night, Runo, Mira, and Kato comfort Dan, Marucho, and Shun, bringing the trio back together in the process. They head to a stadium where Wiseman meets them. Dan tells him that they are going to fight for the Bakugan's freedom, starting another battle between Wiseman and the Brawlers.

The battle between the Brawlers and Wiseman goes smoothly until Wiseman dismisses the Nonets again and summons the evil Mechtogan, where the Brawlers tell their Bakugan to combine, a fierce battle begins as Betadron tells the Nonets to chant evil thoughts about destroying Drago, this powers up the Mechtogan. The Mechtogan then form Mechtavius Destroyer, however the Brawlers are unable to defeat them even with the combinations. Shun and Marucho try to defend from a powerful attack from Mechtavius Destroyer and fail. The Brawlers are on the edge of defeat. Suddenly, Dragonoid Destroyer uses 20% of his energy reserves to summon two new Mechtogan for Jaakor and Radizen: Thorak and Flytris. Dan and the others then begin to use a powerful combined ability and manage to break through Mechtavius Destroyer's shield. Thorak and Flytris combine into Duomechtra and give the Brawlers the advantage they needed to win the match. Shun tries to capture Wiseman as he flees, but to no avail. Mira later tells the Brawlers that Thorak and Flytris came from 20% of Dragonoid Destroyer's reserve energy, leaving Dan wondering what he'll use for the other 10% as the episode ends. 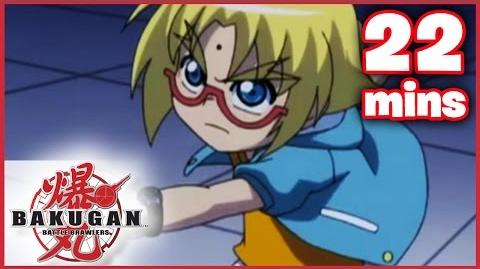