Saved By the Siren

Klaus, Baron, and Ace, successfully contact Dan and warn them about the Vexos, so Dan decides to head to Vestal, and face the Vexos. However, when Zenoheld decides to test the BT System, Shun heads to New Vestroia with his newly evolved Master Ingram, while the others head to Vestal. Once Shun arrives, he finds that all the Bakugan are missing and Master Ingram is still in ball form. Skyress arrives and tells him that a metal sphere came from the sky, and sent a beam that trapped all the Bakugan in Ball Form. Shun attempts to destroy the device but finds that it is protected by a force field. All of a sudden Lync appears to take the Ventus energy and a battle ensues. When Master Ingram and Hylash have trouble against Lync's new Mechanical Bakugan Aluze, Shun is forced to call on Skyress for help. During the battle, Ingram begins feeling doubts about his evolution and is taken out of the battle. When Skyress begins struggling against Lync, Master Ingram decides to embrace his new powers and re-enters the battle, defeating Lync. In the aftermath, Skyress disappears and wishes Shun and Ingram luck.

Ingram takes a direct hit and is wiped out.

Shun wins this round.

Master Ingram then uses his ability Shadow Wing by himself, creating Shadow Wing and sending it into the battle. (Shadow Wing: 350 Gs) 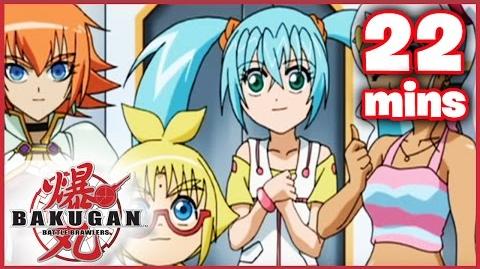