The Brawler's Last Stand is the 28th episode of Bakugan Battle Brawlers. It aired on March 16, 2008, in English.

The Brawlers find themselves grieving the loss of their friends, Dan and Drago, who are in the Doom Dimension. When Shun receives a challenge from Masquerade to brawl, he decides to join his friend Dan even if it means losing to Masquerade. Also though Shun tries to keep his plan a secret, Skyress chooses to tell the other Guardian Bakugan about Shun's plan. The other Brawlers catch on after finding their Bakugan after joyriding on a roller skate, trying to somehow enter the Doom Dimension on their own. The Brawlers decide to rescue Dan from the Doom Dimension by allowing Masquerade to beat them. Runo calls Dan's mom, Miyoko, to tell her that Dan will be coming home soon. Worried about Runo's mysterious message, Miyoko searches and sees Dan's friends and a masked brawler in an abandoned factory. But before she could get there, Runo and Dan's friends vanished. When she asked the masked brawler where's Dan and his friends, he leaves the scene only to say, "Doom Dimension." The four brawlers began their journey to find Dan. 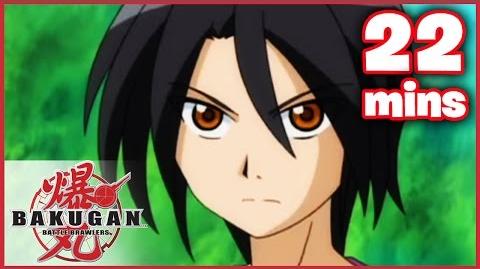