As the Resistance heads to Beta City, there is a scene on both sides, that Dan and Runo miss each other dearly and Dan even compaires Mira Fermin to Runo. Runo decides to go to New Vestroia to help Dan defeat the Vexos. Kato flies her and Julie to Moscow, to meet with Alice and her grandfather to go to New Vestroia. Dr. Michael reveals that his transporter is not functioning properly, and refuses to let Runo go. Later that night, Runo and Julie sneak into the lab and Julie prepares to send Runo off. Meanwhile, in New Vestroia while the Resistance members are having dinner Mira first hears about Runo from Dan and questions him on if he and Runo are a couple (he says they are not, but Marucho, Drago, and Shun say they are), and later that night everyone is beginning to hear the conversation between Runo and Julie because of the weakening wall between the two worlds. Runo does make it to New Vestroia, but finds that she is only halfway there, being unable to touch anything, but still able to see and speak with Dan. Prince Hydron decides to take advantage of Runo's distress by sending Shadow to make sure that Runo remains trapped. While Marucho handles Shadow, Dan takes Runo to the gate only to get attacked by Shadow's Bakugan. With Dan down, Runo rushes to help him, but he urges her to go to the gate. To make matters worse, Spectra, Gus, and Lync follow her through the portal as do Dan, Mira, and Baron.

The Brawl continues in Gate Crashers. 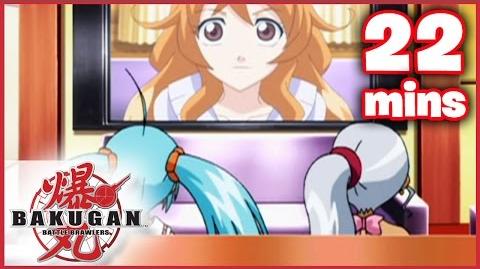