Sid Returns is the 23rd episode of Bakugan: Gundalian Invaders. It aired on October 2, 2010.

Inside Kazarina's lab, Sid, Lena, Jesse, and Zenet were not killed, but held in stasis tubes. Sid suddenly wakes up and escapes the laboratory, while noticing Ren is heading to Neathia. Meanwhile, Dan and Drago are tearing through another wave of Gundalians on Neathia. They were doing fine until Ren showed up and started attacking them with Linehalt's Boomix. As they are fighting, Dan begins to question Ren on why he is fighting for Emperor Barodius. He replies by saying that Barodius freed him from living underground. Dan retorts that he may be free, but he was happier when he was friends with Marucho. Ren shouts that he doesn't understand him as he is a Gundalian, but Dan adds that he is also a Brawler and reminded him of their hospitality. Ren recalls his memories of when he first met Linehalt and shouts that he doesn't want to go back to the darkness. Dan replies that Barodius is the one who sent him there in the first place and again asks him to rejoin the Brawlers. Ren refuses because he wants to honor the memories of his fallen comrades, and continues fighting. Shortly after they resume, Sid and Rubanoid join the fight much to Ren's surprise. But despite the both of their efforts, Dan still defeats them. After the battle Sid tells Ren that the rest of his team members are really still alive, but "all bottled up". Just as they're about to leave, Dharak shows up and attacks Sid for escaping. Ren tries to help him from falling in a ravine, but Sid gives him Rubanoid and lets go. Dharak gets Ren to come back with him much to Dan's dismay. He yells out to him to come back, but Dharak tells him to stop wasting his breath and leaves. 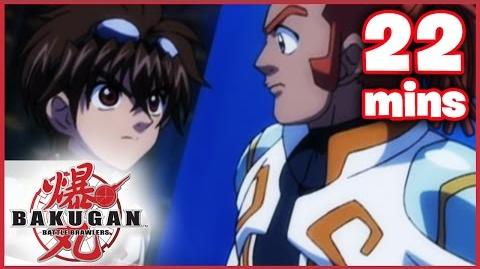