Spectra and Gus, stuck on Earth, stay in an abandoned factory. When Gus returns with “juice in boxes” (there's no such thing as juice-boxes on Vestal), he finds that Spectra is gone. While Dan trains his apprentice Baron, Spectra runs into a female fortune-teller, who tells him, that if he stays on the path he's chosen, he will meet his end, but he does not listen to her. Spectra decides to take Drago by force, now being tired of waiting for Dan to join him. He sends one of Gus' robot hornets to challenge him, and they meet in the arena where he last fought Masquerade. Mira, Baron and Runo worry about Dan being out on his own. In the first round, Dan takes a major loss, but manages to strike back with his Bakugan Trap Scorpion. But then Spectra pulls out his own Mechanical Bakugan Trap Metalfencer. Helios gets frustrated and demands that he give him more power. Spectra willingly obliges and activates a Forbidden Ability Card to give Helios absolute power. Dan and Drago are disgusted by this massive power and what it could do to Helios, but neither Spectra nor Helios seem to care about the consequences. Drago is no match for this power and loses, with Spectra claiming him as his prize. Dan is crushed by his defeat and the loss of his partner Drago, while his rival walks by the same female fortune-teller, who is shocked by how much darker his future has become, but it seems that Spectra doesn't care.

Spectra wins this round.

Scorpio gets wiped out by Battle Unit Mode from behind.

Winner of the Brawl is Spectra Phantom.

Difference between the Japanese and English dub 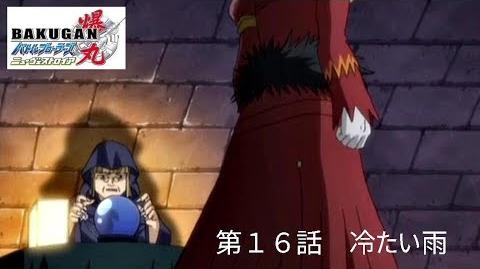