Saved By the Siren

While Dan is shocked by a surprise visit from Mira, she reminisces over Spectra. Ace searches the city for a place Baron can stay. As he approaches a future building site for an apartment complex, Baron calls Ace and tells him how the Haos Energy was stolen by Hydron. Then, Mylene appears and challenges him for the Darkus Energy. As the battle drags on, Ace and Percival eventually become overwhelmed by her Mechanical Bakugan, Macubass. Before Macubass can execute the final blow, Sirenoid appears from the lake below them, moments before Klaus joins to aid Ace's battle against Mylene. With their combined efforts, they manage to drive Mylene away and defeat her, right after she says that she'll return with the rest of the Vexos for the Darkus Energy. It is revealed Klaus helped Dr. Gehabich develop his Dimensional Transporter system. After meeting up with Sirenoid, his foundation continues to fund the scientist's research as well as managing timeshare on Vestal. By the end, Baron had arrived to join them and Ace has become angered with Klaus constantly calling him ”Ace, my boy”.

Macubass is hit by its own attack and get knocked out.

Ace wins this round.

Percival is attacked from behind and gets knocked out.

Ace attempts to open his Gate Card, but is blocked by Marina Cavitation.

Sirenoid then appears out of the lake and combines Power Levels with Percival.

Ace and Klaus win the brawl. 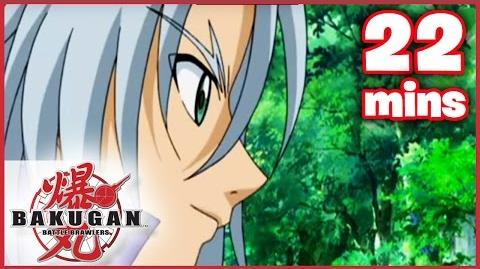