Return to New Vestroia is the 8th episode of Bakugan: Mechtanium Surge. It aired on April 3, 2011.

Dan and Drago finally arrive in New Vestroia to train in an attempt to control Drago's new powers. In Drago's secret training area, Dan and Drago find Aquos Amazon, Preyas student and Preyas himself asking if Marucho is with him in which Dan replies no. Amazon, having heard all about Drago from Preyas, wishes to battle with Drago. However, Dan and Drago are unsure because they may lose control of their powers again. Dan determines that each time Drago has lost control it has been in Bakugan Interspace, a virtual world and the result may be different in the real world. While Drago and Amazon begin battling, Mag Mel and Razenoid begin feeling Drago's immense power, deducing that he is battling in the real world. During the battle, Dan and Drago suddenly have another vision of Mag Mel and Razenoid and they pass out with one last fireball. Preyas and Amazon leave while Dan and Drago rest. Amazon thinks that he is more powerful than Drago but Preyas says that something's wrong with Drago. Back in Bakugan Interspace, Shun is dominating the battle field and defeating opponent after opponent. Marucho is impressed but thinks that Shun should take it easy on the battlers. Shun, however brushes him off and declares that as the new leader of the Brawlers, its up to him to get the Brawlers back on top. Back in New Vestroia, Dan and Drago are worried that their visions have out carried into the real world. The episode ends with Mag Mel and Razenoid realizing that Dan and Drago are in New Vestroia. 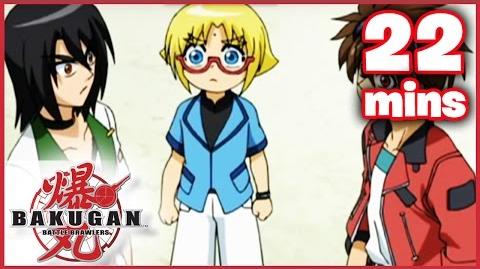