Redemption is the 32nd episode of Bakugan: Gundalian Invaders. It aired on November 27, 2010.

After Dan Kuso's battle with Barodius he returns Jake back to Dan but he's still hypnotized, serving for the Gundalians and tackling Dan until put him in jail. He tries to summon Drago to break out, but it is surrounded by a force field that keeps Bakugan in ball form. Meanwhile, Nurzak and Fabia Sheen end up head to head with Kazarina and Stoica. They end up doing pretty well thanks him for whispering battle strategies to Fabia. However, both of them summon their Battle Gear and break a hole in the floor, making it fall down to Nurzak and Fabia. Meanwhile, Mason Brown and Ren Krawler arrive at Kazarina's lab only to find that Lena Isis, Jesse Glenn and Zenet Surrow have been brainwashed before. Back with Nurzak and the Princess of Neathia, they are hiding an a small alcove, planning their next move; she wants to charge back into battle, but he tells her a story about a friend who tried that and lost his daughter because of his foolishness (although it is obvious that Nurzak was referring to himself). But, Kazarina and Stoica found them and starting another battle between the four. Things are going great for Nurzak and Fabia until Kazarina reveals that it was her who released Lena, Jesse, and Zenet, and hypnotized them all only into obeying her orders. Then, Stoica decides to use an ability that floods the entire battlefield in an attempt to kill Nurzak and Fabia. Shocked by his insanity, Kazarina decides to retreat with the rest of his teammates. Stoica then watches as his rivals start to drown and get swept away by the current. Nurzak manages to keep her from being swept away, but he himself continues to be carried away with Sabator chasing after him. Fabia fall down to the water and has Aranaut try to find them unsuccessfully. They then meet up with Mason and Ren. Finally, Dan is still trying to escape from prison when Kazarina comes along. He is eager to escape and fight her, but she ends up hypnotizing him, bringing yet the leader of the Brawlers in deep sleep. 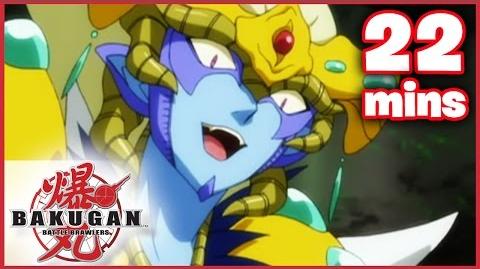