Re-connection is the 13th episode of Bakugan: Mechtanium Surge. It aired on May 15th, 2011.

In the cafe in Bakugan Interspace, Shun is trying to relax a little. Marucho then arrives, and tries to tell Shun that he is battling way too much and suggests a break on Earth. Shun gets angry, and says he doesn't need a break. Marucho then suggests battling him but Shun just leaves.

Back on New Vestroia, Dan and Drago were talking about Code Eve. Wavern then asks who Code Eve is and they explain who she is. Wavern suggests looking through their memories. The first thing they see is when they first saw the Sacred Orb on Neathia. Then they are brought to the battle against Dharak Colossus and with Linehalt using his Forbidden Powers. After, they are brought to the final battle between Dharak and Drago. Finally, they are at the point where they are given the powers. They finally remember when Drago evolved. The feeling was the same as Drago losing control. They are brought back to New Vestroia.

In Bakugan Interspace, Shun is in a championship battle and defeated a brawler with a Cyclone Percival. Rafe and Paige talk about how Shun battles and how they are bad. He advances to the semi-finals to battle Anubias. It is also revealed that Sellon will face Marucho. Sellon and Anubias lose their battles which leads to Noah beginning to doubt why he likes Anubias. However, Ben reassures that he just threw the battle.

The finals are Marucho vs. Shun. Shun appears to be winning but Marucho stays determined. Rafe and Paige discuss about Marucho's determination. Marucho then wins Round 1. Throughout the battle, Marucho tries to convince Shun to go back to his old ways. After losing both Round 2 and 3 to Shun, Marucho begins to cry but Shun became convinced and seen the error in his ways. Rafe talks about conflict bringing a stronger connection while Paige begins to be a fan of them. Sellon and Anubias talk, revealing that they just threw their battles. Sellon tells Anubias that with them as a team, they will be able to produce more energy for Mag Mel with Anubias not wanting to throw another battle.

After seeing their memories, Drago begins to think that the evolution wasn't the error, that it was him, not being ready. Dan says that he is also to blame and they plan to train. Wavern hopes that they will find out that teamwork leads to success and disappears.

Anubias and Sellon are seen reporting to Mag Mel. Mag Mel tells them that the reason Drago's powers haven't been mastered is because each Brawler and Bakugan have a connection code. After his evolution, Dan became a "key" and Drago became a "gate". He needs to retrieve it from New Vestroia. Anubias prepares to go but Mag Mel sends Sellon instead, angering Anubias. Sellon arrives at New Vestroia and changes into her Neathian form. 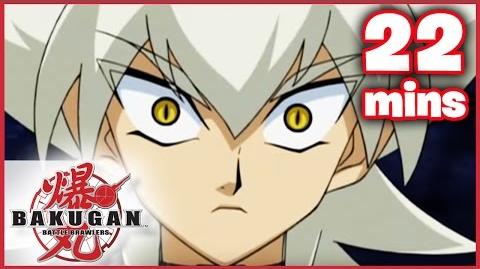