The Boy from Brazil

Ramparian is a terrapin/sauropod-like Bakugan & a new Guardian Bakugan of Shun Kazami in Bakugan: Armored Alliance.

Ramparian is Shun’s newfound Bakugan partner. Ramparian is physically large and hefty in stature and has the personality to match. He’s extremely vain and arrogant, concerned with the way he appears above all else.

He's a Bakugan who is as large in vanity as he is in size. Ramparian is very prideful and cares much about how he looks and appeals, more so than over battling. He will do whatever it takes within his interest to get attention from others.

However, while Ramparian is an arrogant Bakugan, he is nonetheless a very proficient battler so long as his ego is understood. The more confidence he is given, the more he appeals, thus the better he does in battle. He works very well with Shun under these conditions, and is shown to be a team player with Shun to win a battle together. As pointed out in "The Boy from Brazil", he proudly states that he and Shun 'won't lose to someone who treats their partner like dirt'.

Shun found him at a lake while on their way to a soccer game. Shun used Ramparian in battle against an arrogant soccer player. With Ramparian's arrogance, he greatly underestimated Striker's nimble attacks and was quick to lose confidence. However, Shun motivated him back into the battle, where he learned to rely on giving Ramparian and his vanity attention to help him improve during the battle. After unleashing their Baku-Gear, Tempest Generator, Ramparian and Shun ended up victorious.

He made another appearance in "Awesome Brawlers Training Camp Part 1", where he and Hydorous were training with Shun for the Bakugan Battle League in isolation from the other Brawlers.

In "A Battle of Popularity", Ramparian was used alongside Hydorous and Fade Ninja against Duran Dane in the Bakugan Battle League Tournament in a contest to see who can get the most cheers from spectators and crowd alike. However, while in performance, he was defeated.

He battled again in "Thief and Brawler" when Shun battled Ajit in the semifinals. With the battlefield being alongside water, Ramparian dove into the water to avoid Pharol's attack. Using his Aquos Disk, he skillfully maneuvered around the battlefield. However, Pharol was able to overpower Ramparian and drive him away. With his BP low, his Bakugear was shot. Pharol made one more attempt to attack, but Ramparian was successful in using Tempest Generator, finally defeating Pharol, who hasn't lost up until that point. However, due to taking too much damage, Shun withdrew Ramparian for the rest of the battle. 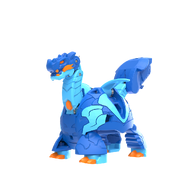 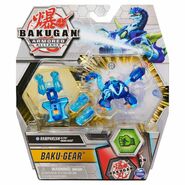