Pincitaur is a laid back, easy-going spirit, who loves to take any opportunity for a good nap. When it comes to Bakugan Battling he doesn’t get what all the fuss is about.Pincitaur isn’t particularly strategic, which doesn’t always mesh well with the clever and thief-skilled Ajit. Ajit’s strategies are too complicated for the simple-minded Pincitaur, who’s rarely able to follow or even remember instructions. Except when he gets angry – then you better watch out as there is no holding him back.

Pincitaur is more lazy and laid-back compared to the other island Bakugan, spending most of his time relaxing than battling and tends to get easily distracted which makes him oblivious to what's currently happening.

Despite his laid-back nature, Ferascal states that Pincitaur is the toughest of the group when he gets angry, then he becomes more serious and aggressive in the field. Pincitaur really hates it when others mistaken him for or call him a scorpion, because he isn't a scorpion, rather a sand crab. If that happens, Pincitaur becomes extremely furious and will stop at nothing to get back at those who called him a 'scorpion'. When he's calmed down, Pincitaur forgets what happened during his rampage, which suggests that he has short term memory loss.

Pincitaur first appears in The Bakugan of Junk Island.

He also makes his appearance in Lia and Fenneca, where he appears sleeping on the table.

He appears in A Former Thief and a Laid Back Dude. 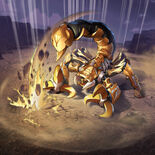 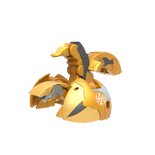 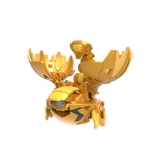