Phantom Data Attack is the 43rd episode of Bakugan: New Vestroia. It aired on March 6, 2010.

With the BT System destroyed, and New Vestroia safe once more, the Bakugan are all moved back to New Vestroia from Marucho's house. The Bakugan thank the Resistance as they depart from Marucho's house, while Klaus remains on Vestal in case the Vexos reveal themselves. Baron, Mira and Ace decided to stay on Earth to train and head to Dan's house for dinner. However, Marucho calls them saying that strange data has appeared in Bakugan Interspace in the form of unknown Bakugan. Everyone heads into Bakugan Interspace, and meet four Bakugan that even Drago doesn't recognize. The Bakugan do not communicate so Baron suggests battling with them. Marucho creates a digital copy of Baron so his challenger Haos Aranaut has a partner brawler. The battle does not go so well for Baron and things get even worse when Avatar Baron whips out Battle Gear for Aranaut. Aranaut defeats Baron and Nemus, and destroys the field of Bakugan Interspace. Everyone begins suspecting that Spectra may have sent the Phantom Data. 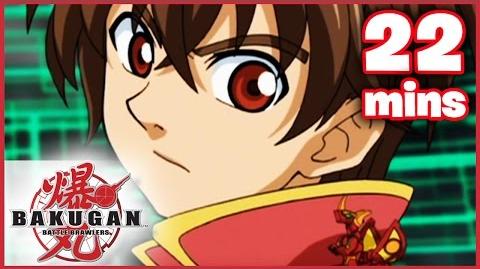