Pegatrix (ペガトリクス, Pegatorikusu?) is a pegasus/alicorn hybrid Bakugan that appears in Bakugan: Battle Planet. She is the primary Guardian Bakugan of Lia Venegas after Gorthion. A Ventus Pegatrix appeared controlled by by Lia's doppelganger.

A self-styled queen of Bakugan, Pegatrix has certain opinions about how her human girl should behave… & Lia is all about challenging those opinions. Pegatrix is strong-willed & powerful in battle, but also enjoys finding the beauty in the world. It’s Lia’s mission to expand Pegatrix's horizons & redefine girl power so they can be true partners.

Pegatrix appears to Lia while she is testing some of her new filming equipment with the Awesome Ones. Lia notices something in the background of some of her test footage, and upon investigating the nearby woods, comes across a white flower in the middle of a clearing. The flower becomes enveloped with the same goo from the second Great Collision, and after it bursts, Lia notices that Pegatrix is suddenly in her hand. Pegatrix has the ability to calm surrounding creatures, shown as she uses this power on Wynton, Dan, and Lightning. Pegatrix warns Lia against going into the brawl stubbornly and without thinking it through, but Lia brushes her off, claiming that she "won't lose". During the brawl, Lia attempts to grab a Haos one close to her on the Hide Matrix, however China has a series of hidden platforms that can rise and fall on her command, which prevent Lia from obtaining access to any BakuCores. Due to her inability to grab BakuCores, and general distracted state, Lia loses the brawl, and Gorthion. Lia, upset over the loss of her partner, is consoled by Pegatrix, and the two of them work to help Drago and Trox. Pegatrix acts as an "eye in the sky", locating BakuCores for Dan and Wynton. With the combined effort of Drago, Trox, and Pegatrix, the Awesome Ones easily beat Maxotaur, and Gorthion is returned to Lia. However, China refuses to hand over Maxotaur, and escapes with Jenkins on a helicopter.

Pegatrix helps out with the contest between Magnus Black and Shun Kazami to join the Awesome Ones.

Pegatrix is among the rescue party that rescues Bear from Strata the Hunter. 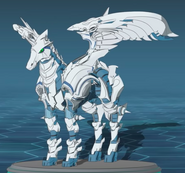