Partners 'Til the End

The Secret of the Orb

Partners 'Til The End is the 20th episode of Bakugan: Gundalian Invaders. It aired on October 2, 2010.

The Brawlers decide to use the Sacred Orb to their advantage by convincing Gundalians who fear its power to switch sides, namely Nurzak. Ren has a meeting with Barodius, where the Emperor reveals that despite the failures of Ren's team, he keeps Ren around because of his potential. Suddenly, Zenet comes in and begs Ren to help her, fearing that she will suffer the same fate as the others. Ren brushes her off and tells her she has nothing to worry about. Contestir tries to cheer her up by agreeing with Ren, but Zenet tells him that Gundalians care nothing of loyalty and despite her morphing abilities she has no use to them. Then she overhears that Gill and Ren are leaving to Neathia to destroy the second shield again. She disguises herself as Ren to take his place in order to prove herself, but Krakix easily sees through the disguise and Gill decides to give her a chance anyway. While Gill and Krakix gather data on the second shield to completely destroy it, Zenet must keep Shun and Hawktor off him.

However, Shun proves to be too much for her to handle, so Gill steps in and nearly defeats Shun, that is until Dan and Drago arrive. Gill and Zenet are defeated and return to Gundalia, where Zenet greatly fears her punishment. However, Contestir convinces Gill that because he is Barodius' right-hand man, he will likely have people plotting against him, and that he may have use for a spy and volunteers Zenet. Gill sees this as a good idea and sends her to spy on Kazarina, disguised as Nurzak. She pulls it off and returns with information that Kazarina and Nurzak are plotting to overthrow the Emperor. Despite a job well done, Gill and Krakix dispose of Zenet and Contestir. Zenet once again explains Contestir that Gundalians care nothing for loyalty. Contestir argues that he has always been loyal to Zenet, who begins crying and apologizes for not seeing it earlier. 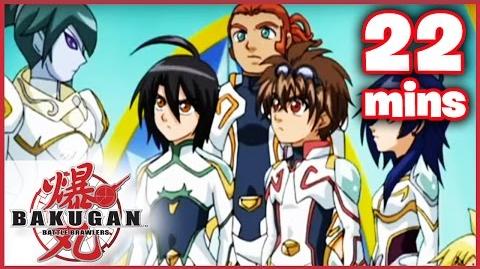