An Heir To Spare

Zenoheld sends Mylene to retrieve the plans for the Alternative from the Brawlers. Shadow Prove accompanies her for backup and they easily infiltrate Marucho's mansion. After some searching they discover it is a trap planned by the Brawlers. While Shadow Prove is punished by Keith Fermin, Mylene is able to hold Mira Fermin hostage in order to blackmail the Brawlers into giving them the plans. Keith agrees and takes them down an elevator to the location of the plans. However, this is a trap as it leads to the Bakugan Interspace. The siblings battle Shadow Prove and Mylene Farrow, with the condition being that if they lose, then will leaving the Vexos and join the Brawlers to finished Zenoheld. The tag brawl with Keith defeating Shadow Prove too easily using Helios MK2 and that left just the girls. Just as Mylene is about to directly attack Mira using Macubass, Keith and Helios interfere. She tells him that can handle it by herself and Keith withdraws from the battle. Mira is able to overcome Mylene and win using Magma Wilda. Mylene throws a grenade at Mira and Keith, creating a warp hole, in hopes of trapping them. Instead, it crashes Bakugan Interspace trapping the four in it.

Helios blasts a hole into MAC Spider, causing it to get destroyed.

Helios MK2 goes back to Spectra.

Macubass gets burned and destroyed, leaving only its legs. 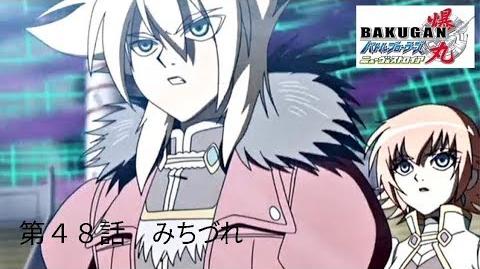