Seeing how desperately he needs a partner to help Dan and the Resistance, Marucho takes his gear, and heads out in search of a Bakugan to battle with. At the same time, Mylene also goes hunting for Bakugan, after throwing away three Bakugan she claimed useless. In the morning, Marucho meets Aquos Elfin, a Bakugan who turned out to know Preyas, as she explains that after his capture she had to watch over the forest and protect the Bakugan living there from harm. When Marucho asks to be partners with her, she at first declines because she claims to be "waiting for the right partner". Although when Marucho explains that he needs her to help free the Bakugan (as this is what Preyas would have wanted), she says that if he passes her test she will at least think about a "temporary partnership". As the testing goes underway, with Marucho not doing so well, Mylene flies over and in fury, and Elfin and Marucho demand she and the Vexos return the stolen Bakugan. Angered at how cruel Mylene is to the Bakugan, Marucho and Elfin challenge her to a brawl. Mylene, however soon begins to show her skill and may end up winning Elfin as her new Bakugan. Just when Mylene is about to seize Elfin, a hooded figure wielding a Ventus Bakugan arrives and saves Marucho. Mylene states that she's tired of losing to this hooded person, and offers him to join the Vexos, but he leaves without saying a word and Mylene departs. Meanwhile, Marucho slowly awakens despaired that Elfin is gone. But as it turned out Elfin was merely off to find him some water and then begins explaining how she couldn't let anything happen to her "goofy partner". In the end, Elfin and Marucho become partners, and are able to aid the Resistance in their journey. 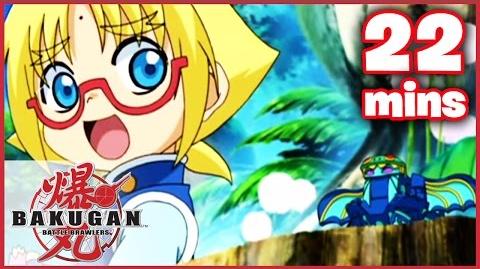 Retrieved from "https://bakugan.fandom.com/wiki/Marucho%27s_Mission?oldid=762206"
Community content is available under CC-BY-SA unless otherwise noted.