Duel in the Dunes

With Ace and Marucho captured by the Vexos, Shun decides to head to Beta City alone, to destroy the controller. On the way, he's ambushed by Shadow Prove, who is armed with Alpha Hydranoid much to their horror as they believe Hydra is brainwashed. In the middle of the battle, Shun and Ingram realize that it is not the same Hydranoid they know, but instead it is really a Mechanical Bakugan called Hades. Hades was created from Hydranoid's DNA, and has none of the weaknesses that Altair had. Shun tries his best to hold his ground, but Ingram and Hylash are no match for Shadow Prove, Hades and his Bakugan Trap, Fortress. Shun contemplates throwing in the towel out of fear, for losing his partner like how he almost lost Skyress in a tough battle (though it isn't said how), but Ingram convinces him otherwise and that she will always be there next to him. Shun was defeated by Shadow Prove and passes out. The Vexos having now captured the rest of the Resistance, plan to keep them as hostages, while keeping Dan and the others stuck on Earth forever, while they take all the Bakugan.

“Hydranoid” defeats Ingram while Ingram was immobile, blasting him and knocking him out.

"Hydranoid" was revealed to be Hades, a Mechanical Bakugan.

The blasts are too powerful for Ingram and Hylash to block, and wipes them both out.

Hades blasts both Ingram and Hylash wiping them both out. 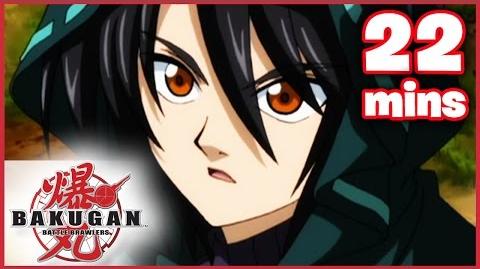