Krakelios is a Kraken-like Bakugan that appears in Bakugan Battle Planet. He is the Guardian Bakugan of Strata the Hunter.

Lacks emotional intelligence, but is quick to calculate his plan of attack. He's an enormous size octopus style monster. He arrives in silence, attacking his unprepared opponent & surrounding them with all eight of legs. Perhaps his weakest point is attacks from the sky. This bakugan is owned by Strata 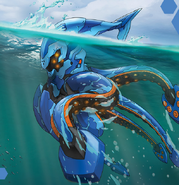