Hyper Kelion
Kelion (ケリオン, Kerion?) is a Qilin-like Bakugan that appears in Bakugan Battle Planet. Originally owned by a boy named Kino. he is now one of Dan Kouzo's new Bakugan. Later, he is given back to Kino in the final episode of Battle Planet "United We Stand".

Dan and his crew first met the Pyrus Bakugan, Kelion, on a forbidden island. Though he had been living in isolation, he quickly learned how to use and master his powerful Pyrus attacks. His magma lance can incapacitate any enemies, leaving them trembling in fear. Ferocious but loyal, Kelion is both a fearsome opponent and a faithful ally. 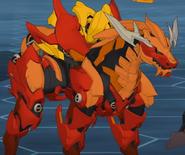