Jake Returns is the 28th episode of Bakugan: Gundalian Invaders. It aired on October 30, 2010.

At the beginning of the episode, we see how Jake Vallory is tortured and hypnotized by Kazarina. Meanwhile, after losing him by the Gundalians, Dan Kuso decides to go to Gundalia to rescue him. However, the other Brawlers stop him as it is too dangerous, without a plan or backup. But suddenly Jake shows up back on Neathia, alive, but slightly injured. He claims to have escaped, but he has no idea what happened or how he escaped. He then collapses and later ends up in the infirmary. Shun Kazami, suspicious of Jake's sudden escape, decides to test if it is really him by asking if he remembers helping restart the second shield, but he remembers that he and Marucho Marukura were decoys to allow Dan and Shun to restart the second shield. Later the other Brawlers decide they need to attack Gundalia to end the war, but Jake gets out of the infirmary and suggests they beef up the third shield. Captain Elright assures him that the third shield is strong enough to keep the Gundalians out, but Jake claims to know a way to improve on it. Dan then gets suspicious of Jake, as he normally has no technological know-how. He then talks with Captain Elright in secret. That night, Kazarina has Jake break into the third shield room and plant a virus in it, but he is suddenly teleported in the middle of nowhere and confronted by Dan, who set a trap for him. He realizes that Jake has betrayed them, in trying to sabotage the third shield. Jake then reveals that he was brainwashed by Kazarina, obeying her orders, working for the Gundalians and the two battle. Dan struggles against Jake, as Kazarina gave him an Ability Card that doubles his effect of Coredem's abilities in exchange for his life. Just when he was about to lose, Shun shows up to help. The two defeat Jake, but fail to break him from Kazarina's control. Kazarina then shows up and teleports him back to her ship. Before that scene, Jake later warns Dan that he will not be showing any weakness the next time they meet. Dan then cries and yells out his name. 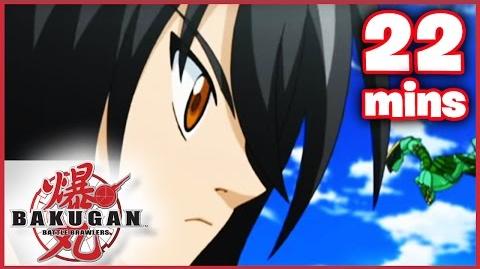