Jake's Last Stand is the 33rd episode of Bakugan: Gundalian Invaders. It aired on December 4, 2010.

After Fabia escaped the current, she tells Mason and Ren that Kazarina has hypnotized Ren's old team. Mason then comes up with a plan to snap them out of it, and leads them to Nurzak's secret hideout. Meanwhile, after hypnotizing Dan, Kazarina brings Barodius to her lab and studies Drago's DNA. She finds the reason Drago won against Dharak is because he has evolved many, many times. She then suggests that Dharak needs to evolve in order to beat Drago and that he can do so if she copies Drago's DNA. Meanwhile, Shun and Marucho decide to split up to look for Dan and Jake. Shun takes a path that eventually leads to an observation deck and witnesses Barodius and Kazarina performing experiments on Drago. However, he attracts their attention and is forced to flee when Lumagrowl attacks. Meanwhile, Marucho ends up in a strategy session where Jake is giving strategies to the soldiers on how to defeat the Brawlers. After Kazarina interrupts and tells them that the Brawlers have infiltrated the castle all of the soldiers scramble leaving just Jake and Marucho. Marucho decides to reveal himself and tries to snap Jake out of his hypnosis, but they end up battling. Although Jake has the upper hand, Marucho still manages to hold his own. Eventually they decide to equip their Battle Gear and attack each other, but the blast knocks both Bakugan out and causes the floor to crack open. Marucho falls, but is saved by Shun and Hawktor. 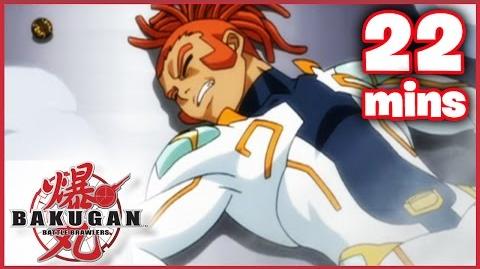