Into the Storm is the 27th episode of Bakugan: Gundalian Invaders. It aired on October 23, 2010.

Soon after Ren joins the Castle Knights, Gill begin attacking the third shield. When he finds out that the third shield contains a DNA barrier, he retreated back to Gundalia for a new strategy. Meanwhile, the Neathians send out patrols to watch out for any Gundalians attacking with the Brawlers divided into groups of two to help the patrols: Marucho and Ren in one group, while Shun and Fabia is in other group. Dan and Jake are in another group and they soon find an Earth boy named Robin who claims to have escaped the Gundalians. He wants the two to help find his sister, and Jake wants to help him, but Dan tries to hold him back as it is too dangerous as there is a geomagnetic storm in the area. Jake then decides to look for Robin himself. But it turns out to be a trap as Robin was brainwashed by Kazarina and the Gundalians all along. Kazarina appears and challenges Jake to a battle. He struggles against Kazarina, but is determined to free the brainwashed children from the Gundalians. Kazarina then reveals that all of the brainwashed children are back on Earth safe and sound and she lured Jake into a trap to use him instead. Kazarina then defeats Jake. Meanwhile, Dan reports back what had happened and the others scolded him for letting Jake go out on his own. The rest of the Brawlers arrive too late: Jake lost his brawl and they only watched him transported with Coredem back to Gundalia along with Kazarina. 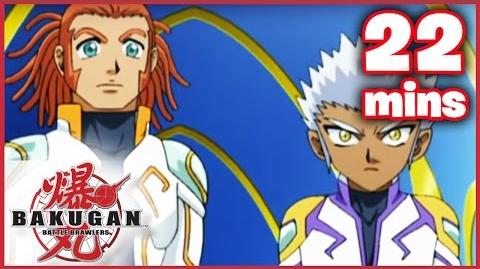