Infiltrated is the 30th episode of Bakugan: Gundalian Invaders. It aired on November 13, 2010.

While the Brawlers are on their way to Gundalia, Ren Krawler tells the others that he wishes to save the rest of his team from Kazarina's lab, to which the other Brawlers agree. Ren, Mason Brown and Nurzak split off from the rest of the team to rescue them. Princess Fabia comes with them because she still does not completely trust them. Meanwhile, Dan Kuso, Marucho Marukura and Shun Kazami continue in an attempt to rescue Jake Vallory, who is hypnotized to obey the orders of Kazarina. However, they are ambushed by a large number of Gundalian Bakugan and several Mobile Assault Vehicles. The three of them fend off the attacking Bakugan, but start to have trouble. To help them, Dragonoid Colossus calls on several Battle Gears to attach to him. They then manage to make their way inside the Gundalian castle. Dragonoid Colossus wishes them good luck and returns inside Dan's BakuMeter. Meanwhile, Barodius, Gill and Airzel are watching them from inside the throne room and Barodius orders to his agents to separate Dan from his friends so that he may defeat Dan, take Dragonoid Colossus, and eventually seize the Sacred Orb. They succeed in doing so and end up challenging Marucho and Shun. Meanwhile, Princess Fabia voices her opinion to Ren, Mason and Nurzak that she still does not trust them, but because Dan believes Ren is different, she is willing to give them a chance. The four of them hurry onward to Kazarina's lab. At the same time, Marucho and Shun, they struggle to fend off Gill and Airzel, not even being able to land a hit against them. Eventually, they call on their Battle Gear to help them. Shun manages to defeat Airzel using a sneak attack, but he and Marucho fall to Gill after he calls on his Battle Gear, Vicer and uses his Gate Card to remove their Battle Gear. Before Gill and Airzel can do anything else, Shun throws a smoke ball and the two of them escape. Meanwhile, Dan is still lost within the Gundalian castle when a door opens up to a strange room and he is confronted by Barodius, eager to challenge him to a battle hand to hand.

Differences between Japanese and English dub 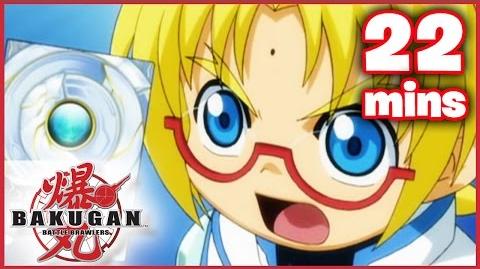