Howlkor (ハウルカー, Haurukā?) is a Cerberus-like Bakugan that appears in Bakugan: Battle Planet. He is the Guardian Bakugan of Lightning.

This aggressive Bakugan is so into winning - it's scary. Actually, Howlkor scares Lightning quite often! Howlkor chose the dog as his partner because he thought that Lightning's animal instinct would help them in battle— not realizing that Lightning isn’t super-aggressive. Over the course of time, Lightning will have no choice but to become an alpha male if he wants to get Howlkor under control and that will suit the warrior just fine.

Lightning discovers Howlkor after the events of the second Great Collision.

While Howlkor and Lightning are training with Dan and Drago, one of Howlkor's Prismatic Bolt attacks launches Drago in the aired, towards a nearby house. Dan recalls Drago back into his ball form to avoid destroying the house, but Drago still manages to break a window pane. The pair receive a scolding from the owner of the house, while Kravitz watches. Later, as Kravitz is wrecking havoc in Los Volmos attempting to get Bakugan banned, Howlkor is forced out of ball form while the Awesome Ones are creating a mock video. Kravitz then confronts the Awesome Ones again, disguised as the anti-Bakugan activist, along with several members of the community, include Bill and Barbara Kouzo. The group of protesters, including Dan's parents, demand that the Awesome Ones had their Bakugan over to Kravitz. Kravitz takes their Bakugan, declaring everything "safe".

While this is occurring, Benton Dusk watches, and decides to cause a weather satellite to plummet towards Los Volmos. Back in their clubhouse, the Awesome Ones watch Veronica Venegas as she reports on the incoming satellite. Dan formulates a plan: if they could get their Bakugan back, they could destroy the satellite and repair Los Volmos' perceptions towards Bakugan. The team stops Kravitz on her way out of Los Volmos, demanding their Bakugan back. Kravitz declines, but as she walks past the Awesome Ones, her device that forces Bakugan out of their ball forms is knocked from her person, falling and activating the Bakugan in the cases. The Bakugan break free, and Kravitz escapes. Howlkor and Lightning are reunited, and begin to help escort civilians out of the city. After seeing this, the citizens of Los Volmos, including Dan's parents, tear up their anti-Bakugan fliers, and return to accepting Bakugan. 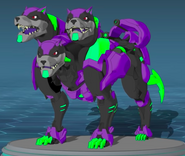